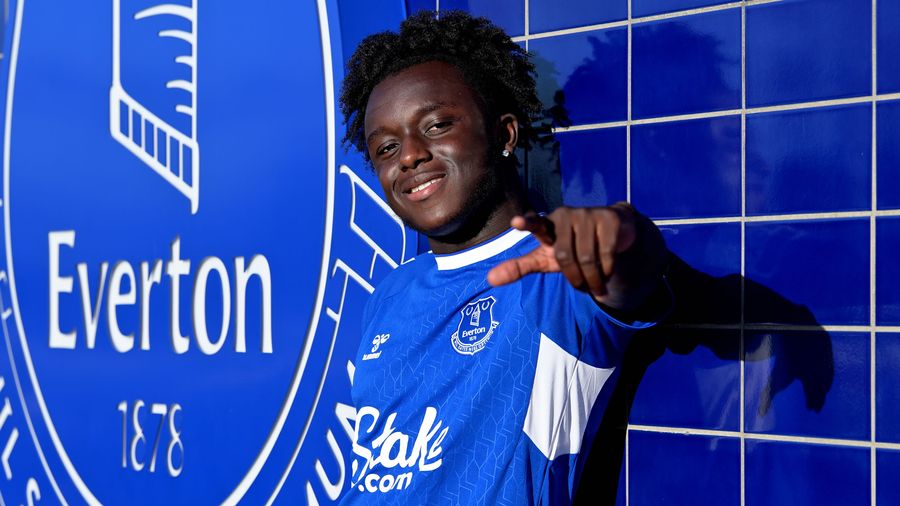 Katia Kouyate signed his first professional contract for Everton in September 2020 with a 3-year deal running through June 2023.

Described on the official Everton website as "a fast, skilful and direct attacker ... [capable of] operating as a central striker or from either flank," the highly-regarded 17-year-old has been part of the Finch Farm Academy since he was 8 and has been rewarded for his impressive development throughout his time at the Club. Born in Manchester and eligible to represent England and Ivory Coast.

Able to play across the forward line, Kouyate impressed David Unsworth after making his U23 bow at Blackburn Rovers in November 2020. Unsworth told the Liverpool Echo afterwards: "I was delighted with Katia. He showed some glimpses, some real flashes of pace and directness and power. That's something that will come naturally in time. Another pre-season will help him, whether that is with us or the first-team, it really doesn't matter. It's really exciting and I'm looking forward to working with him next season."

He got to play in just 3 more games, the last against Liverpool in January 2021, when he was sent off for a bad tackle near the end. He would not play again that season, presumably as a result of subsequent injury problems.

In April 2021, Katia Kouyate underwent a successful operation to repair a damaged hamstring tendon. The 17-year-old - who made his under-23 debut under Unsworth during the 2020-21 season - was then in recovery and would continue to work alongside club medical staff throughout his rehabilitation.

Kouyate posted on social media: "Op was successful we give all thanks to the most high road to recovery big season to come."

The first action after his recovery was for the U18s, followed at the end of September 2021 by a game in the EFL Trophy at Carlisle, where he came on as a sub wearing the No 70 shirt. He then played in the next PL2 game before another extended layoff, coming back first with a game for the U18s again before coming off the bench in 4 games for the U23s, and scoring in 2.

But he did not play again after 6 January 2022, presumably down to recurrent injury problems.

However, he would come back to make a series of appearances mostly off the bench for the new U21s season and the club would signal their commitment to the  the 19-year-old's continuing development  with a new 2-year contract in September 2020 after getting some advanced training with the first-team squad during an international break.

“It was massive to get a chance to train with them recently. It was great to see the difference between the level I am at now and the likes of Dimi [Gray] and Maupay to see where I need to go to to take my game to the next level. Now I’ve been there, I want to strive to get back there.”

Everton Director of Football, Kevin Thelwell, said: “We are pleased to agree this new contract with Katia who continues to progress and develop as a striker. Having had valuable time recently learning from our senior players in training, we now hope he can push on under the guidance of Paul Tait in what is a talented Under-21s squad.”