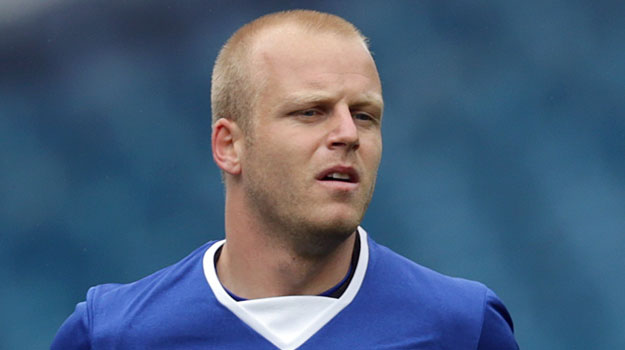 Everton took advantage of the financial implosion on the blue side of Glasgow when they swooped to sign Steven Naismith following the liquidation of the old Rangers in 2012. The Irvine-born Scot was one of a number of players who had declared himself a free agent that summer and David Moyes persuaded him to come south to Merseyside and reunite with former Ibrox striker Nikica Jelavić.

The Croatian had made a tremendous impact in his first half-season at Goodison Park and the pair had enjoyed a prolific partnership north of the Border, one that yielded 56 goals in less than a season and a half and a third successive SPL title for Rangers in 2011. Indeed, Jelavić described Naismith at the time as the best attacking partner he had had in his career thus far while his s former skipper at Ibrox, David Weir, was another  admirer of player’s will to win and commitment to self-improvement.

As a young teenager at his first club Kilmarnock, he was generally eclipsed by rival players now largely forgotten but even then any deficit of natural ability was mitigated by a drive to succeed that allowed him to have the last laugh as he moved through the ranks to enjoy a starring role for his country and eventually cut it in the English Premier League as a natural finisher and scorer of goals on the bog occasion.

Naismith admitted that his departure from Rangers was "an extremely difficult decision to make. I believe it is the right decision. As players we were put in a difficult position by the administrators whereby we were asked to take a 75% pay cut to contracts that we entered into in good faith."

For Everton, as a free-transfer acquisition the Scot was seen as a canny acquisition by Moyes and a player who could replace the fire and commitment of Tim Cahill who was nearing the end of his lengthy and successful at Goodison.

A versatile attacker – he is neither a conventional striker nor midfielder – Naismith would earn a reputation as a "big-game" player and something of an under-appreciated goalscorer in his 3½-year spell with Everton.

Naismith began his career with Kilmarnock in 2004. He spent four years with the Ayrshire side and during that time he won the SFWA Young Player of the Year in 2006 and the SPFA award the following season despite being largely overshadowed by Kris Boyd. The player famously scored with his first touch of the ball at international level, as a 19-year-old for Scotland Under-21s against Iceland in March 2006 and joined Rangers in 2007 for a fee of £1.9m. While with Rangers, Naismith won three consecutive league titles, the Scottish Cup in 2008 and the League Cup twice, in 2010 and 2011.

The early part of his time at Everton was mixed to say the least, with Moyes tending to deploy him in a less familiar role in right midfield where he struggled to impress. He scored the first of four goals that season in memorable fashion as the Blues came from behind to draw 2-2 in the Goodison derby in October 2012 but it was his fine strike in the final game of the campaign at Chelsea, another 2-1 defeat, that hinted at his ability as a natural goalscorer and better suitability to a striker's role rather than midfielder.

Indeed, he would flourish under Moyes's successor, Roberto Martinez, in a more forward role as Everton ignited under the Spaniard to finish with their record points haul to date in the Premier League and an impressive fifth-place finish in 2013-14. Naismith's winning goal in a vital 1-0 win over Chelsea in September that was cited as the catalyst for an exciting campaign was the first of nine he would score that season as he formed an exciting attacking trio alongside Romelu Lukaku and Kevin Mirallas.

He would follow that with another eight goals the following season as Everton progressed to the last 16 of the Europa League but struggled to a disappointing 11th-place on the domestic front. Naismith continued to score goals in big matches, notching against Chelsea once more, again versus Arsenal, against both Manchester clubs and against Wolfsburg in Europe.

His dwindling involvement over the last quarter of the 2014-15 season, however, as Martinez eventually stabilised Everton's league form was a precursor to the frustrations to come for Naismith later in 2015, although he came very close to joining Norwich City in an £8m deal on transfer deadline day in September but, lacking cover for him, Martinez blocked the move.

Once more Naismith would demonstrate his splendid nose for goals in the early part of the 2015-16 season, not least than in another important game against Chelsea where he came on as a 10th-minute substitute in place of the injured Muhamed Besic and completed a "perfect" hat-trick-– he scored with a header, his left foot and right foot – in a handsome 3-1 win over the defending Champions.

It was a feat that suggested Naismith had regained his standing as a valued goal poacher in Everton's team and had assured himself of the regular first-team action he craved. It would prove to be something of a spectacular early swansong, however, as he would soon find himself increasingly outside of the first-team reckoning again. He started the next four League games but failed to convince and his involvement in a disappointing 3-0 home defeat to Manchester United in October would be his last Premier League start for the Toffees as Martinez turned increasingly to Arouna Kone to partner Lukaku.

When Norwich revived their interest at the end of the year, Martinez assented to Naismith's desire to leave and an £8.5m deal saw the now 29-year-old Scottish international join the Canaries' fight to stay in the Premier League after 3½ years, 122 appearances and 25 goals in Everton colours.

That fight was unsuccessful but a bonus would come from the deal for Everton 3 years later, when Norwich secured their return to the top flight, triggering the payment of an additional £1 million.