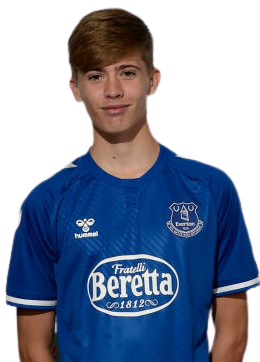 Isaac Price has been part of the Finch Farm Academy since the age of 7, and made his full breakthrough to become part of the Under-18s side in the 2020-21 season.

Price, who was born in Northern Ireland but grew up in Wakefield, is eligible to represent England, Northern Ireland or Germany at international level and has already represented the first two nations at Under-19 level. Price signed his first professional contract, a 3-year deal, in September 2020.

Under the mentoring and promotion of Leighton Baines, Price made speedy progress between U18 and U23 sides in the 2020-21 season, being accelerated to the first-team squad, helping the teenager settle both socially and professionally in each environment. After stepping up to the first-team squad, he impressed  former manager Carlo Ancelotti, making the senior bench for the first time away at Brighton in April 2021 amidst a massive injury crisis.

Unsworth said of the youngster in 2021: "Isaac is a box-to-box midfielder. He is a great passer, he's got a bit of everything. He still has to develop physically, as you can see; he's not the finished article physically, but that will come. That's just time, hours and hours in the gym, which he already does on his own individual programme.

"That's something that will come naturally in time. Another pre-season will help him, whether that is with us or the first-team, it really doesn't matter. It's really exciting and I'm looking forward to working with him next season."

His progress was temporarily stalled at the end of the 2020-21 season when he missed the final weeks of the campaign with a stress fracture of the hip but returned to start the new 2021-22 season as a fixture in David Unsworth's Under-23s, where he topped the appearance charts,  and made his senior debut as a substitute in Everton's 2-0 win in the FA Cup over non-league Boreham Wood in March 2022.

The next first-team action Price would see was on the other side of the world in Sydney, Australia when he was a surprise starter in place of the injured Tom Davies in the first Sydney Super Cup friendly against Glasgow Celtic.