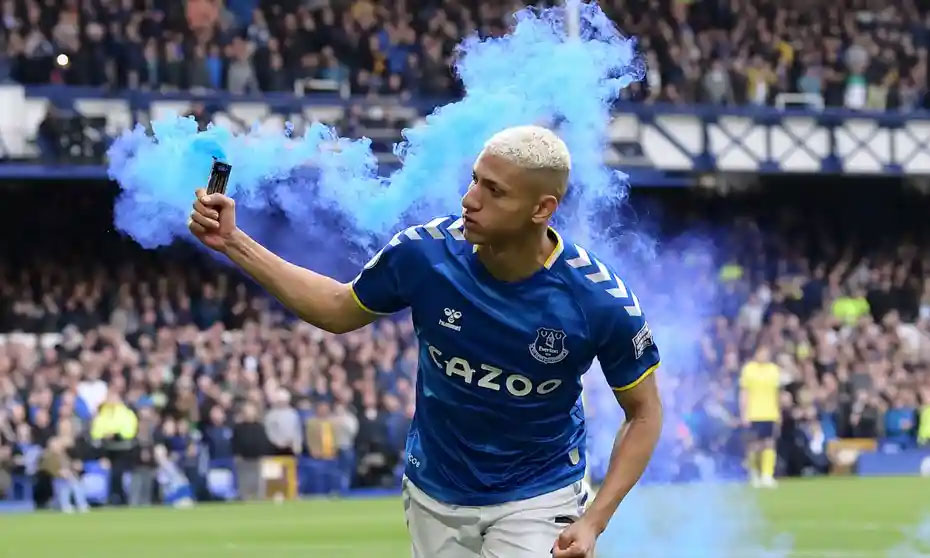 Richarlison joined Everton from Watford in a deal worth a reported £40m in July 2018, the Brazilian forward signing a five-year contract with the club. The move represented a reunion with new Toffees boss, Marco Silva, who had previously signed the player from Fluminese for a little over £11m, persuading him to join the Hornets rather than Ajax the previous year.

The then 20-year-old had starred for his country at the U20 World Cup and he demonstrated his star quality with five goals in his first 12 games for Watford as they ascended to the top six early last season. The Hertfordshire club's form nose-dived after November, however, mirrored by Richarlison's personal performances and he failed to score a goal after the 19th of that month.

By mid-January, the decision was taken to relieve Silva of his duties, with the Watford hierarchy citing Everton's attempts to lure their manager away in the wake of their sacking of Ronald Koeman as having been critically destabilising. The Portuguese had a shot at redemption with the Toffees while Richarlison arrived with a big price tag around his neck but with enormous potential.

He began his career in his native Brazil with América Mineiro from Belo Horizonte where he scored nine times in 24 games in 2015-16. He was acquired by Fluminese for the following season and struck another nine goals in 42 appearances before Watford came calling.

"I want to have a lot of success with Everton," he told evertonfc.com after his arrival was announced. "I think it is going to be important for me here to be with Marco Silva again. I will learn more because I am still learning as a player and I aim to develop and grow here.I've known the manager for a while obviously, so I know how he works. I developed really well with him while he was with me at Watford."

He got off to a flying start with two goals in the season-opener at Wolves and another at home to Southampton, only to severely blot his copy book, getting baited by Adam Smith at Bournemouth and being sent off for an innocuous "head butt", picking up a three-game ban.

Richarlison expressed his determination to learn from the incident and he would impress in patches over the rest of the season. His goal return slowed after a spell leading the line as a centre-forward as Silva grappled with the lack of a consistent marksman. Playing the target man, the Brazil forward (a call-up to his country's senior side came during the 2018-19 season) was required to hold the ball up and link up play, usually with his back to goal which was less his forte than running at defenders from deep.

As the season progressed, it looked more likely that Dominic Calvert-Lewin could fulfill the centre-forward role and that allowed Richarlison to revert to the left side but his contribution become increasingly peripheral and his form dipped in concert with that of the Everton team as a whole during an alarming winter slump.

He would find a tonic in a new role playing wide on the right, though; one that would address the conundrum of Theo Walcott's poor displays while also allowing Bernard to regularly be deployed on the opposite flank. The result was a steady improvement in Richarlison's game and an uptick in his goals return that would see him finish his first season as joint-top scorer with Gylfi Sigurdsson.

Despite the team struggling through the first half of the 2019-20 season, Richarlison, now wearing the No. 7 shirt, had secured a permanent starting role in Silva's team selections and  continued to score goals at a similar frequency, albeit a little below that required of a top-class Premier League striker. However, in December 2019, after Silva had been dismissed following a dreadful run of form, the club felt it was important to extend their mutual commitment with Richarlison, in part to fend off rumoured interest from suitors like Manchester United, securing a 12-month extension to his original 5-year deal, on improved terms, running through June 2024.

The Brazlian took the opportunity to confirm his feelings for the club and its fans:  “I intend to be here a long time,” he said. “This was the club which gave me the opportunity to show my football. It was here I managed to get a place in the Brazil national team and it was here I have scored lots of goals in the Premier League. The club trusts me and I trust them.”

As he had done in his first season at Goodison, Richarlison finished the pandemic-disrupted and protracted 2019-20 season as Everton's top scorer, sharing the accolade this time with Dominic Calvert-Lewin, both notching 15 goals in all competitions. After Silva left, caretaker boss Duncan Ferguson had deployed the Brazil international in a two-man forward line with Calvert-Lewin, a formation that continued under Carlo Ancelotti.

Richarlison's importance to the much-improved team that made such a great start of the 2020-21 campaign was crystalized in a rash moment near the end of the Goodison derby game in October when the Brazilian tried but failed to successfully pull out of a reckless tackle on Thiago Alcântara and received a straight red card. Richarlison felt compelled to apologise for the tackle and watched from the sidelines as Everton lost their 100% winning record and struggled in his absence over the next three games.

The Blues would pull out of an autumn slump to sit in second place in the Premier League on Boxing Day 2020 but Richarlison himself could not build on his previous season's goal tally and his form tended to wax and wane with that of the team that eventually fell away from European contention and finished a dismal 10th in the Premier League.

However, the apex of that ultimately disappointing campaign, played almost entirely behind closed doors because of the pandemic, was Richarlison combining with the increasingly elusive James Rodriguez to score what was effectively the first winning goal in an Anfield derby for 22 years when he latched onto the Colombian's excellent through-ball and belted it past Alisson in the Liverpool goal to set the Blues on their way to a memorable 2-0 victory.

Richarlison would go on to spend most of Summer 2021 playing for his beloved Brazil, firstly in the Copa America, where they lost narrowly to Argentina in the final, and then more controversially in the delayed 2020 Olympics, where he won a gold medal in the final, and was the tournament's top scorer.

He was back with Everton just in time to train for the first game of the season and duly scored the Toffees' first goal of 2021-22 under new boss Rafael Benitez but suffered a costly injury in only the second home game of the campaign when he was scythed down by Burnley's James Tarkowski ,which cost him the next few weeks of the season and, together with Calvert-Lewin, deprived the team of much of its firepower.

Richarlison returned to a team struggling badly for form under Benitez and though he scored an excellent header in a rare victory over Arsenal at Goodison Park in December 2021 but wouldn't score again for another month by which time Everton's form was so poor that the Spanish head coach was sacked following a 2-1 defeat at bottom club Norwich City.

Although the Brazilian scored a consolation goal in that game, it preceded another two-month barren spell and seven damaging losses as Everton's latest managerial hire, Frank Lampard, struggled to get to grips with the demoralised group of players he had inherited from Benitez. The new boss brought an energy, enthusiasm and positivity to an increasingly desperate situation, howeveer, and as the supporters rallied behind the team, Richarlison responded in tandem.

Six goals and two assists in the final 10 games of a nerve-racking run-in would culminate with Richarlison's dramatic winner against Chelsea – the iconic photograph of him holding a billowing blue smoke would be an enduring image of the season – and crucial equaliser in the final home game as Everton came back from 2-0 down at half-time to beat Crystal Palace 3-2, thereby ensuring the Blues' Premier League survival. He would later reveal how close he came to missing both games.

The final weeks of the season had been played out, however, amidst talk that he had changed agents in order to secure a move on to a team that would give him Champions League football after committing to Ancelotti that he would give Everton at least one more season. It was Richarlison's stated dream to get to Europe's biggest stage with the Toffees but with the club's fortunes heading in the opposite direction in 2021-22, it made sense for the Brazil star to move on, eventually joining Tottenham Hotspur at the end of June 2022 in a deal worth a guaranteed £50m, potentially rising to £60m based on appearances-related clauses.

His departure was greeted with sadness by Evertonians but with the best wishes of the fans which was reflective of his consistent passion for the club and his desire to leave everything on the field in service to the Blues' cause, particularly in the final few weeks of his time at the club when he delivered on the promise of keeping the club in the Premier League.

His parting message was in tune with the special relationship he forged with Everton's supporters in whichhe acknowledged how difficult it was to to say goodbye "to a place that has become my home; of fans who welcomed me not just as another player, but as if I were one of them in the stands."