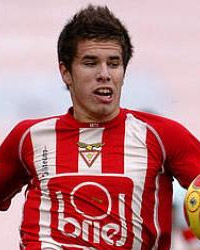 Coming a week after the acquisition of Jermaine Beckford on a free transfer from Leeds United, João Silva was David Moyes's third acquisition of the 2010 close season, coming from CD Aves after he bagged an impressive 14 goals during his first full campaign in the Portuguese second-tier Liga de Honra.

Like Beckford and goalkeeper Jan Mucha, the Portuguese striker signed a pre-contract agreement with Everton a few weeks prior to finalizing his move to Goodison but, after the deal was initially reported by the media as done in April, was finally unveiled by the club on 9 June.

An unknown in England — apart from the obligatory YouTube footage — Silva was highly rated in his home country where some dubbed him "the new Pauleta." Yet to earn a full international cap at the time of his arrival at Goodison, the 20 year-old had represented Portugal at U-21 level and finished the 2009-2010 season as the second-top scorer in the Portuguese second division with 14 goals in 32 appearances.

“My first year as a senior went well, I scored 14 goals, got called up to the Under-20s, and that’s when Everton showed up. I was excited because my characteristics fit in with the English style of play, and I thought I’d do well. I felt ready for it,” he would later say in an interview.

He signed a 3-year deal with the Blues and though the fee was undisclosed, it is widely believed that the Blues paid around £500k for him. Strictly, he became the second "João Silva" to play for the club — his Brazilian namesake went by the monicker Jô — but promised to be a more physical presence than the powder-puff ex-Manchester City man.

João Silva went on Everton's pre-season tour of Australia in 2010, but ended up sitting out all three games Down Under on the subs bench.

As the 2010-11 season progressed, his appearances in the Reserves became rarer and in January 2011, Silva returned to Portugal on loan with Uniao Desportiva de Leiria until the end of the season, where he scored four goals in 12 games, before returning to Goodison Park in the summer.

Appearances for the Reserves on their trip to Moscow to play in the Lev Yashin Cup against Freiburg and Dinamo Moscow followed but he would not make the breakthrough into Moyes's first team the following season, the manager agreeing to loan him out to Vitória de Setúbal of the Primeira Liga back in his homeland for all of 2011-12. He would return early, however, following the transfer of Louis Saha to Tottenham on transfer deadline day in January, making a brief Reserves appearance in February 2012.

Though tied to a three-year deal at Everton, the Portuguese claimed in September 2011 that he would look for a permanent move elsewhere if Moyes continued to overlook him:

"I will consider leaving Everton if I receive assurances of first-team football elsewhere," he said.

"Everton are a big club but I need playing time and a club that has confidence in me and gives me opportunities."

At the end of that season, with his first-team opportunities seemingly as far away as ever, he reiterated his threat to quit Goodison, essentially sending a come-and-get-me message to Vitoria Guimaraes via A Bola in June:

"Everton do not want my exit but this move would be of interest to me. Guimaraes were always a club that pleased me.

"I do not want to say too much on the subject but if the chance arises I would not rule it out."

That chance finally came in July 2012, but it was to Bulgaria, not back home to Portugal.  Silva was transfered to Leveski Sofia for an undisclosed fee said in the Bulgarian media to be the modest sum of €400k.

João Silva never did get to play for the Everton first team. He would later comment that

“Since I wasn’t playing, I was loaned to UD Leiria in January. I scored four goals, I scored against Benfica, and I remember David Moyes praising me after that game.

“I thought I was going to make it at Everton, but everything stayed the same. I had some very strong competitors, international football stars .

“Everton didn’t play with so many forwards either; they had a different tactic, a set of situations that didn’t help.”