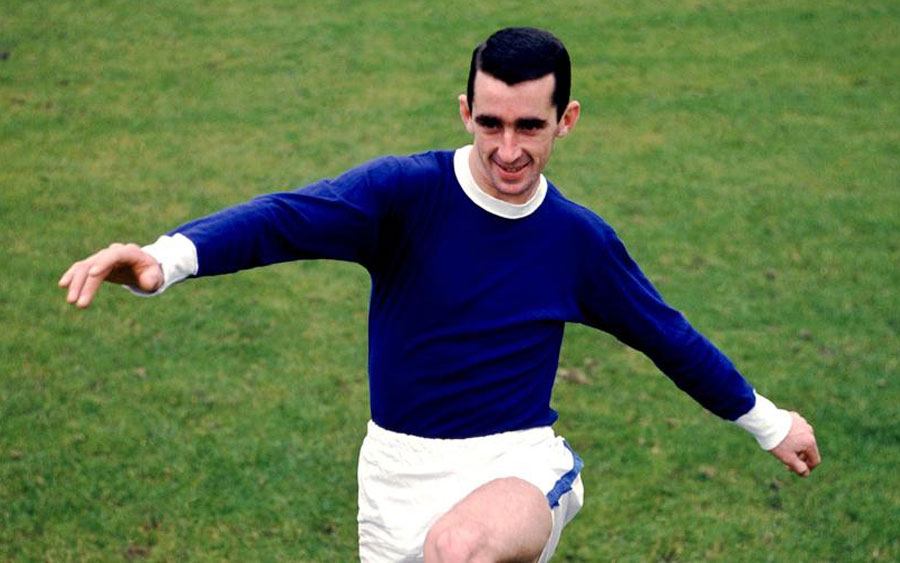 Johnny Carey must have known what he was letting himself in for when he signed Roy Vernon from Blackburn Rovers in February 1960. A payment of £27,000 plus Eddie Thomas captured him a footballer of rebellious temperament but also of outstanding ability. Vernon had the type of arrogant demeanor which seems to blend so well with footballing talent such as his and often produces players who appear to operate on an altogether higher plane.

The penalty area was Vernon's domain, the way he would lurk unnoticed and then slash with deadly accuracy putting observers in mind of some kind of assassin. Perhaps it was his skinny, lithe appearance – which very effectively concealed his enormous strength – or maybe it was the way he struck the ball savagely with negligible backlift, thrusting rapier-like at the enemy's worst-guarded points; or possibly it was the combination of the two. Whichever, it was entirely appropriate.

Three of his four completed seasons at Everton were spent under the management of Harry Catterick. Vernon and Catterick never really clicked together, but nevertheless Vernon scored freely and Catterick made that Welshman captain in an effort to calm his rebellious tendencies. Vernon still managed to get himself sent home from a tour of the United States for breaking curfew, but the ploy worked to an extent and he lifted the League Championship trophy for Everton in 1962/63, a season in which he top-scored, as he did in all those four full seasons with the club. But his fruitful partnership with Alex Young never compensated for his differences of opinion with Catterick, and in March 1965 a £40,000 move to Stoke City seemed in the best interests of all concerned. It didn't turn out to be quite the case, though, as Vernon's time in the Potteries, though productive, never matched his spell at Everton.

I knew Roy when we were youngsters.  My father and his father were good friends back in the 1940s.  Roy and me we went to Glyndwr School in Rhyl where Roy became Captain of our school football team.   In the late forties and early fifties, we played football with the youth of the village in Ffynnongroew on a field near Llynacre Farm.  Whenever we played football in the village, Roy would get the ball and practice his ball control skills, leaving us waiting to carry on the game.  The field was owned by Lord Mostyn who would come on his horse and chase us off.  One day, Lord Mostyn declared in the local papers that the lower end of the field would be fenced off and given to the village as a place for the children to play.  Up until the early seventies, the fence on this field remained.  I find it sad that Flintshire County Council have never paid tribute to the great star in the form of a plaque or name something after him. – Emlyn Foulkes


When Roy Vernon turned down the chance of a trial at Everton in favour of joining Blackburn Rovers' groundstaff, little did the Welshman know that he would go on to become a true Goodison legend and earn 32 caps for his country. In five years during the glorious 1960s, Vernon racked up over 100 goals in the Everton jersey, one of only six players so far to achieve that feat for the club.

Roy was brought to Goodison in 1960 by his former manager at Ewood Park, Johnny Carey, having made his league debut for Rovers at the age of 18; Eddie Thomas went the other way with Everton paying a further £27,000. On 13th February that year Vernon made his debut against Wolverhampton Wanderers and although he failed to find the net in the Blues' 2-0 defeat, he scored no less than seven in his next four games!

In partnership with the Golden Vision, Alex Young, Vernon was the linch-pin of Everton's famous title-winning side of the 1962-63 season, although Roy himself brushed off such praise by insisting that the club's success was down to manager Harry Catterick's ability to "weld the team into a team in the true sense of the word".

Nevertheless, the Welsh wizard's contribution stood out above most as he scored eight goals in the final seven matches of that season - including a hat-trick against Fulham on the final day of the season - to guide the Blues to a fantastic championship success. He finished as the team's top marksman with 24 goals that season.

While his exploits on the pitch conjure up images of a supreme and powerful athlete, Roy Vernon was anything but. He was a notoriously heavy smoker and various accounts from players at the time describe how he used to stub out his cigarettes in the tunnel before taking the field and lighting up in the showers afterwards. Brian Labone said of him: "Taffy Vernon was about 10 stone wet through and looked about as athletic as Pinocchio."

However, despite being very slight in frame, Roy had a lethal shot, a wonderful array of skills and a cool aura in front of goal. He left Goodison in 1965 to join Stoke City for £40,000 before spending a time playing in South Africa. Sadly he died in December 1993 from cancer but his spirit will live on at Goodison Park thanks to his contribution to Everton's golden age in the 1960s.