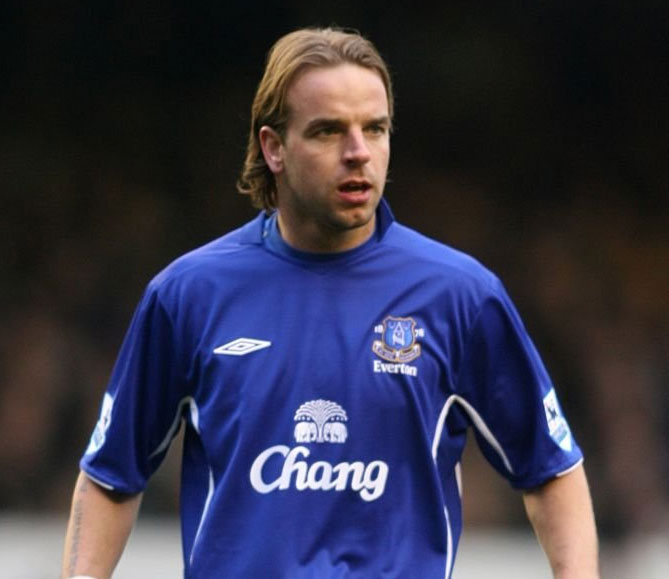 Few players arrived at Everton with as much potential and left having been such a colossal disappointment than Andy van der Meyde, who was signed as a very highly-rated winger with a pedigree that included Ajax, Inter Milan, and of course the Dutch national side in the summer of 2005.

Regarded as one of the most talented players of his generation, he had failed to set Serie A alight but still being only 25, there were big hopes that under the guiding hand of David Moyes, Van der Meyde's gifts could be harnessed at Goodison Park.

Moyes had initally tried to sign him for £4.5m but when he returned to Inter later, he was able to snap the player up for under £2m and the answers for why would come soon enough and revolved around lingering concerns about his fitness and off-the-field attitude which ultimately contributed to him wasting his career and leaving the Blues for nothing in 2009.

Van der Meyde was a product of the Ajax youth academy and made his debut for the famous Dutch club in 1997 at the age of 18.  He spent a season on loan with FC Twente in 1999-2000 and on his return became a regular in the Ajax side.  From there, his form earned him regular call-ups to the Dutch national side, finally making his debut in May 2002 against the USA.

Although known primarily as right-winger, Van der Meyde was equally at home on the left flank, having been moved there while at Ajax by then coach Ronald Koeman to curb what he saw as the player's individualistic tendencies.

"When Van der Meyde plays on the left he keeps the ball better and doesn't look to make big plays all the time," said Koeman at the time.

Inter Milan paid £4m for the winger in 2003 but he made only 15 appearances in the 2003-04 season. Despite that, he went to Euro 2004 with the Netherlands and helped them reach the semi-finals.  Van der Meyde was again a fringe player at the San Siro in 2004-05 and was told he could find a new club.

His signing for Everton finally went ahead only after a second blood test gave him the all-clear. "I trained too hard for the medical and it appeared my liver was not right," the Dutchman was quoted as saying in what was to be a warning sign of troubles to come. "The sudden intense activity seems to have been too much for my body to cope with, but everything is fine."

He still arrived at Goodison complete with a groin injury that would keep him sidelined for what was supposed to be two weeks but ended up being substantially longer.

On his day, which turned out to be exceedingly rare, he could be an exciting, touch-line hugging winger, not dissimilar to Dave Thomas, who used to bomb up the left wing before supplying Bob Latchford with cross after cross. As with most Dutch players, he possessed excellent technique, and was skillful enough to give full backs a bit of a chasing.  He was fast and he could score his share of goals too.

On the down side, he would fade out of games quite dramatically, and there were serious doubts about his willingness to battle for the team when they were up against it — something that probably didn’t happen a lot when he played for Ajax or Inter Milan.  But for £1.8m, his transfer to Everton on Deadline Day in 2005 was viewed at the time as a fine piece of business by Moyes, as it appeared to strengthen Everton’s midfield options.

Through the dreadful first half of the 2005-06 season, many fans pinned their hopes on Van der Meyde becoming a saviour for a team desperately lacking flair on the flanks and though his debut finally came in October 2005 against Middlesbrough where he set up Simon Davies for what was only Everton's second win of the season, before long he was injured again.  He had managed just 5 starts at this point.

A reappearance from the depths of the treatment room in March 2006 was cruelly cut short by a very unfair red card for flapping his elbows in the Anfield derby, resulting in another three games missed.  Meanwhile, rumours spread of his penchant for enjoying a night out on the town and, as the season 2005-06 season ended, Len Capeling revealed in the Daily Post that the Dutchman appeared to have upset Moyes in record time for his lack of extra-curricular discipline.

With worries over the player's poor attitude, Everton let it be known they were open to offers for a forward who spent more time on the Bellefield treatment table than he did on the Goodison pitch. His first season at the club had been punctuated by injuries, those rumours of off-the-field shenanigans, and two burglaries at his home when first his dog and then his Ferrari were stolen.

Press reports and quotes attributed to the player and his agent that Van der Meyde first wanted to return to Italy and then try his luck at FC Porto were swiftly denied and the winger eventually pledged his future to Everton, vowing to fight for his place at Goodison in the 2006-07 season. However, that place was a long time coming.  It was December before he made his first start of the season, and put in a decent half-shift against West Ham, but the strikers failed to respond to his new supply routes.

Getting a run of games – or even a full game – seemed to be a challenge, for whatever reason.  If it was not lingering injury, then it was lack of match fitness and if he did get a game, he always seemed to be the first to be subbed by Moyes.  He would give tantalising glimpses of the new dimension a fully fit attack-minded winger would bring to Everton's game, but it became increasingly clear he was never going to fit the bill.

In February 2007, he spoke to the News of the World about not being given enough playing time, threatening to leave, and citing his unhappiness that his wife and family had returned to Italy because they were "unable to settle" on Merseyside.

Either because there were no takers for a player who had played so little football in recent seasons, or because he genuinely felt he could recapture his form, Van der Meyde stayed with the Blues in the summer of 2007 but found himself on the wrong side of the manager once more when he failed to show for pre-season training and was (somewhat counter-productively) handed a month-long suspension.

It emerged, however, that his infant daughter had developed post-natal problems and had spent much of the first six months of her life in an incubator. Daily hospital visits no doubt proved problematic when trying to stick to a training routine and Andy clearly made a choice in priorities and put his focus on family.

Although he stayed behind on Merseyside due to his fear of flying while the rest of the Everton squad went on their Summer 2007 tour of the USA, Van der Meyde once again told EvertonTV of his determination to finally succeed at Goodison. Unfortunately for him, he didn't get the chance; even under Moyes's limited squad rotation policy and injury adjustments, there was to be no room for such an unreliable player.

The Dutchman started 2008 on the treatment table after suffering a nasty gash to his leg, which required 16 stitches, while playing for the Reserves and never saw any first-team action. By this stage, stories were claiming that Moyes had had enough of him, and that he would not play for Everton again.  He made a handful of teamsheets during the season but never got off the substitutes' bench.

As the summer transfer window opened in June 2008, Andy was expected to be one of the first out the door... but, as it closed in September, he was still an Everton player, injured yet again, and still with another year to run on his contract.  He had had a brief renaissance in the first handful of 2008 pre-season games when he came roaring out of the traps and tore his hamstring early in the third game, rendering himself unfit yet again for any meaningful action.

Plenty more time in the treatment room followed, plus the usual off-field stories and promises of yet another renaissance, but all he got was 3 sub appearances – one of them proving to be the most productive cameo of his frustrating spell at Everton. Introduced during a tense FA Cup 4th Round Replay under the Goodison lights against Liverpool. and with barely minutes to go in extra-time before penalties, Van der Meyde who put in a peach of a cross that Dan Gosling controlled brilliantly before pitching it neatly into the Liverpool goal. Surely, with such proof of his latent ability, Shandy Andy would be back in from the cold?

Unfortunately, he would make just one more substitute appearance and, instead of finally making the grade, there was a telling outburst indicting the manager for his failures and, from that point on, his destiny was sealed as his year contract was allowed to expire at the end of June 2009.

He spent 6 months without a club before agreeing a six-month deal with PSV Eindhoven in January 2010. He appeared in a friendly in April 2010 but made no senior appearances for PSV. In May 2010, PSV decided not to exercise their option to extend his contract: “PSV think Andy should be able to play regular football but we cannot offer him that opportunity”, explained General Manager Jan Reker at the time.

He does not appear to have secured any subsequent playing engagements and announced his retirement from professional football in February 2011, at the age of 31, saying "I quit; I do not need to give an interview."  Asked about his time in England, he would say bluntly "Shit, all shit. There were only two players who could play football, the rest were just running and kicking the ball. It's unbelievable."

He would later chronicle how the temptations for a millionaire footballer living on Liverpool's waterfront proved too strong, with alcohol and drug addiction offering perhaps the most obvious indicators of why his time at Everton was ultimately so fruitless.