VIEW FROM THE BLUE

The End of an Era

Part One — From Pariah to Messiah 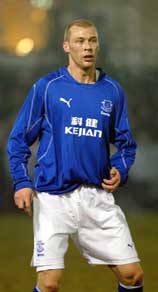 Duncan Ferguson: sought refuge on Merseyside from the media glare north of the Border

For the first time in years, Everton have kicked off a Premiership season without the name of one Duncan Ferguson in the first team squad... and, sacreligious as that may sound to many Blues, that is surely a good thing. For while the towering Scot has etched his name into Goodison folklore, his presence on the field had become more of a hindrance than a help to a team hoping to move in a new direction in terms of playing style.

It is testament to the nature of Ferguson's mercurial career that those words could quite easily have been written in November 1998 — when, in a move that rocked Goodison Park to its foundations, he was sold to Newcastle United by then chairman, Peter Johnson — as they could today. Indeed, just 12 days before that fateful night eight years ago, I wrote this of the controversial striker in my column at Evertonia.com:

"...[T]he time to take the focus away from Duncan is long overdue. Everton simply have to rid themselves of their reliance on his ability in the air and explore other avenues."

So, it was with incredulity and no small amount of scepticism that many fans greeted his return to Goodison Park in August 2000 after less than two years at Newcastle. The "Big Yin" was back, but was that really such a good idea? History now has a chance to judge the wisdom of bringing back one of the most frustrating yet intriguing players ever to have donned the Royal Blue Jersey, assess his contribution to Everton FC as a whole, and ponder the validity of Duncan Ferguson's apparent status as a Goodison "legend."

The road that led Ferguson to Everton in 1994 was littered with many of the footballing highs and disciplinary lows that characterised his career with the Toffees. After starting his career at Carse Thistle in Scotland, he broke into the Dundee United team aged 18 and after representing Scotland at U-21 level, he was called up to the full national side for a game against the United States in 1992. Despite being relatively unproven at the top level, Dundee United received, and turned down, £3m bids for Ferguson from Bayern Munich, Leeds United and Chelsea before Walter Smith decided to break the existing British transfer record and bring him to Rangers for £4m.

Life at Ibrox did not according to plan, however. Injuries and action against his impetuous and ill-disciplined on-field conduct restricted him to just 14 appearances and two goals. And when he was caught deliberately head-butting Raith Rovers midfielder, John McStay, he was handed a suspended 12-match ban by the SFA and ended up in court to answer charges of assault. In a bid to rediscover his form, get first-team action and escape the media glare north of the Border, Ferguson was loaned to Mike Walker's Everton in the autumn of 1994, along with team-mate Iain Durrant. With the Blues in desperate straits, however, having sunk to the bottom of the Premiership without registering a single win in the opening two months of the season, it was no surprise that neither of the loanees made much impact. Walker was sacked in November and Joe Royle installed as manager in his place.

The size of Royle's task was immense. Everton were anchored to the foot of the table and their next fixture was the Merseyside derby against Liverpool. But the new boss, himself a striker who had made his name on the hallowed Goodison turf as a gangly 16 year-old many years before, obviously saw something in the 10 days of preparation he had before his first game in charge because the course of Everton history was altered during that encounter with our local rivals.

Ferguson scored his first Everton goal that day, a towering header from a corner that was to become his trademark in the years to come, and the Blues won 2-0. Successive wins in their next two games set the club on their way to Premiership survival that season and a fairy-tale road to Wembley and victory in the FA Cup Final. Ferguson, now the lifeblood of a team reborn and an instant hero with the fans after signing permanently for £4.4m, scored eight times in all competitions, and though injury curtailed his appearance in the Final to a cameo substitute role, there was no doubting the size of his contribution in the earlier rounds.

The delayed effects of his altercation with McStay, however — not to mention the cumulative effect of three prior incidents when he was fined for butting a policeman, then for kicking a Heart of Midlothian fan on crutches and then put on probation for assaulting a fisherman in a bar — were felt deeply during the following season. Plotting the next stage of his revolution, Royle had signed flying Ukrainian winger, Andrei Kanchelskis, from Manchester United, but he and Ferguson rarely played in the same team. Kanchelskis was sidelined early on with a dislocated shoulder and by the time he had returned to full fitness, Ferguson had been found guilty of assault, imprisoned in Glasgow's Barlinnie prison and had that sentence compounded by the SFA's lengthy suspension, which he was required to serve at Everton.

And the season after that, Royle's regime collapsed when a catalogue of injuries decimated his side, Kanchelskis' form evaporated, and the team equalled the club record of six consecutive defeats as it plummeted down the table towards relegation danger. Ferguson played 31 times in the league and scored 10 goals but it wasn't enough to save Royle's job and he was summarily dismissed by Chairman Peter Johnson in March 1997. Caretaker boss, Dave Watson, steered the club to safety from relegation in the remaining seven matches of the season, with Ferguson vital to that successful effort.

By this stage of his career, Duncan Ferguson was one of the most renowned strikers in the English game, feared for his aerial prowess and lauded for his surprising ability, given his 6' 4" frame, with the ball at his feet. Given the paucity of attacking talent in the Scottish national team, he would likely have been an automatic choice for his country, but the seething anger he felt towards the Scottish footballing authorities for insisting that serving jail time was not punishment enough for his transgressions while at Rangers never abated. As a result, he turned his back on Scotland and vowed never to play for his country again.

It was the perception of being shunned by his country but embraced by the Blue half of Merseyside that forged and strengthened the bond between Ferguson and the Goodison faithful. For a long while there was the feeling that he needed the club as much as the club needed him. Evertonians wrote letters in the hundreds to him while he was in prison and the man dubbed by the media as Everton's "talisman" — a badge of honour that was tarnished several times in subsequent years — reaffirmed his commitment to the Blues with a tattoo dedicated to the club on his shoulder.

If that lofty pedestal was uncomfortable for the Scot, he didn't show it in the near-catastrophic 1997-98 season in which he almost single-handedly saved the club from relegation with some crucial goals, commanding performances and leadership by example of commitment. [Well, mostly! His on-field immaturity raised its ugly head briefly in February 1998 when he tangled with Derby County's Paolo Wanchope and was sent off after only 16 minutes of a demoralising 2-1 defeat.] A hat-trick and six goals in all during a five-match unbeaten spell between late-December and mid-January was surely the decisive in the Blues staying up that season which they ultimately did on the final day of the campaign... but only by the skin of their teeth.

With Kendall relieved from his duties after just one season in charge, Ferguson was reunited with Walter Smith in the summer of 1998 when the man who signed him for Rangers was appointed Everton manager. Smith recognised "Big Dunc's" standing within the club and appointed him captain for 1998-99 season, but with the fans hoping that the new boss would usher in a classier brand of football based on fluid passing there was growing frustration when a team boasting the likes of Nick Barmby, John Collins, Marco Materazzi and Olivier Dacourt was resorting more to "route-one to the Big Man's head."

Ferguson then put a serious dent in the supporters' perception of him when he took the decidedly non-captain-like decision not to take a spot kick in the penalty shoot-out against lower-division Sunderland. Everton lost the tie 5-4 on penalties and were dumped out of the League Cup at the second hurdle.

If there was dismay at Duncan, though, it paled in comparison to the ire directed towards Chairman Johnson after it became apparent that the £20m spending spree that he had sanctioned when Smith arrived had come straight out of the club's overdraft. Feeling the pressure and perhaps sensing that Ferguson had blotted his copybook with the fans, Johnson took swift action, orchestrating the sale of Ferguson — easily his most saleable asset — to Newcastle United for a massive £7m. The problem was that the deal, negotiated behind the scenes during an evening fixture between the two clubs which the striker missed because of injury, was apparently cut without the knowledge of Smith.

Ferguson, feeling that he was being forced out by a club that no longer wanted him, was reportedly distraught but accepted the enormous £40,000-a-week pay packet offered by Ruud Gullit and made his exit for Tyneside, leaving Smith and the Goodison faithful apoplectic. The furore precipitated the downfall of Johnson's chairmanship and he reluctantly set the wheels in motion to sell his 78% stake in Everton to the consortium led by Director and life-long Blue, Bill Kenwright. It seemed as Ferguson had martyred himself in order to save the club from Johnson's disastrous tenure.