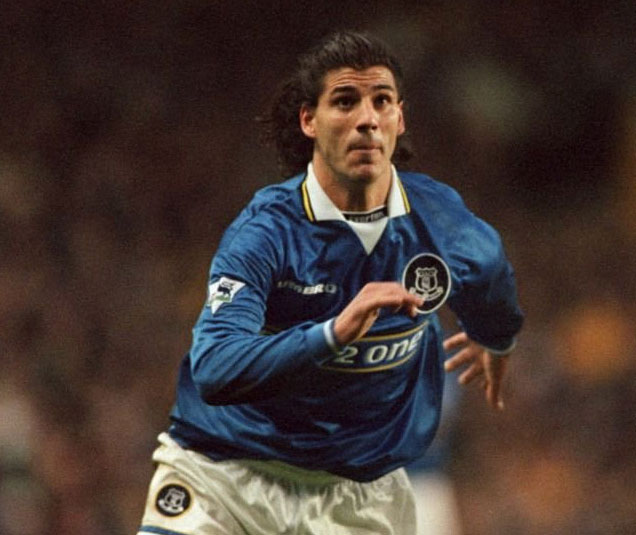 Mickaël Madar joined Everton as perhaps one of Howard Kendall's strangest signings, one who was blessed with talent and looked at one stage as though he could have been very successful in England but ultimately failed to settle on Merseyside.

He had just returned to Deportivo's first team after recovering from a broken leg and his inclusion in the French squad for the 1996 European Championship but was lured away from Spain to Merseyside.

Paris-born Madar was a tall, powerful striker who had began his career with Sochaux and later played for Cannes and Monaco, where he won his first cap for France against Romania in 1995 and scored 14 goals in 52 appearances.

He played as a traditional centre-forward with emphasis on his physical strength on which his game based. He was an opportunist striker and with an acceptable goalscoring record; he possessed good heading ability and intelligent positional sense.

Given these traits, it was interesting to see Kendall playing Madar alongside Duncan Ferguson, rather in his stead. The combination was potent, but it depended heavily on there being a decent supply of playable crosses and through balls. Danny Cadamarteri was the main casualty from Madar's arrival, but the youngster was struggling to live up to his early hype by that stage having burst onto the scene as an 18-year-old and needed the break.

"Mickey" was quick to admit the difficulties he had adjusting to the English game. Talking after a match against Leicester City, where he scored an excellent early goal, Madar said:

"Before I came here I was out for a year with a broken leg and I can't yet play a full 90 minutes at my best.

"I have told Mr Kendall I can't play all the game because it is a fast pace in the Premiership and I get tired because I'm not 20 anymore, I'm almost 30. It is better that I give a good 70 minutes than an average 90. I know the fans wanted me to stay on, but I am tired."

The 1997-98 season was dismal, with Everton surviving relegation on goal difference and Kendall would depart from his third and final spell as manager, to be succeeded by Walter Smith.

A case could have been made that Mickael's magic Gallic touch and superb positional sense brought in those vital goals of his, and really did make a difference but he and Smith never saw eye to eye. A sending off in pre-season and a resulting three-match ban wouldn't have helped his cause with the new boss and there were rumours of training-ground insolence

When asked at a fixture against Blackburn why he wasn't playing while six defenders slugged out a dire 0-0 draw, the Frenchman said: "I've no idea. The manager just doesn't like me. He's only seen me play twice. The first time I got a hat-trick and the second time, I was sent off too quick for him to make any judgements.

"[The chances of me coming back into the team are] nil, as far as I can see. I think they just want to get rid of me and get me off the wage bill. Anyway, my wife is very unhappy here and is desperate to leave. Living in Liverpool isn't the same as living in France or Spain. So it looks like I'll be going fairly soon."

The view from the other side was, of course, quite different. Smith reportedly said of Madar: "Well, I'd have no hesitation playing him if he'd just do as we ask him to do on the training ground. But he won't. He thinks he knows best. End of story. At this moment in time, and as will remain the case until he sorts his head out, Francis Jeffers is ahead of him in the line-up."

After Duncan Ferguson left in Everton in controversial circumstances in November 1998, Madar finally got the chance his stuff before the stern countenance of his Scottish manager... but to no avail. He was obviously well out of place in the new conservative atmosphere of Goodison Park, and a move back to his native France and Paris Saint-Germain was inevitable, if a long time in coming.