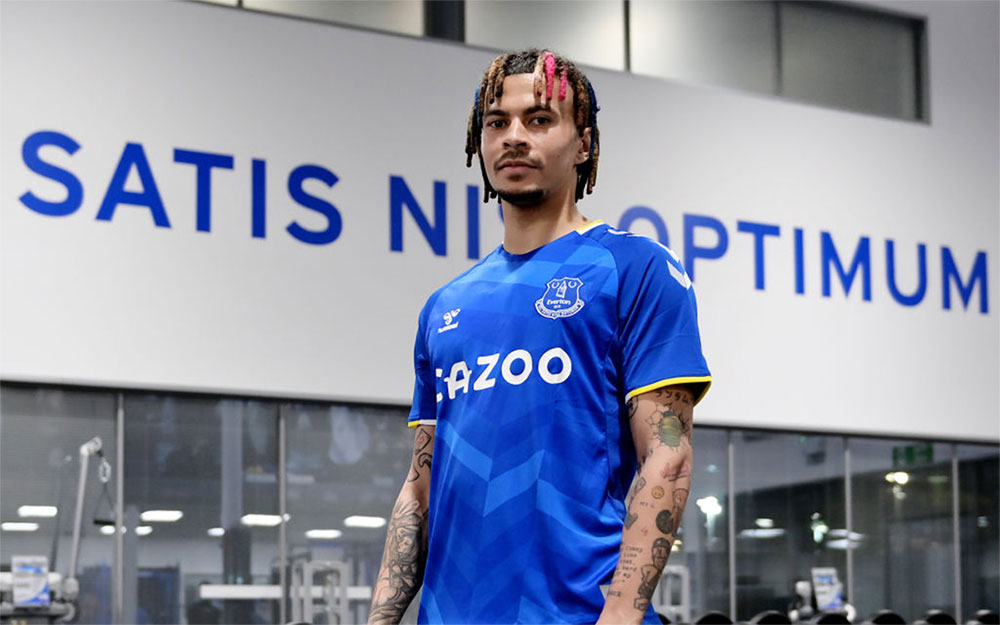 Everton concluded a deadline-beating deal for Dele Alli, signing the then 25-year-old from Tottenham Hotspur on a savvy permanent contract on the day that Frank Lampard was unveiled as the club's new manager at the end of January 2022.

According to media reports, the deal struck with Spurs chairman Daniel Levy committed Everton to paying £10m once the player made his 20th appearance (with Dele cup-tied and only 18 games left in the current Premier League campaign, that pushed any first payment into 2022-23 at the earliest).

An exciting England U19 prospect, Dele was scouted by the likes of Bayern Munich and Liverpool and the subject of serious interest from Newcastle United before he was snapped up from MK Dons by Tottenham in 2015 for just £5m and he quickly set about not only repaying that modest outlay but becominh an integral part of a Spurs side that were challenging for the Premier League title within two years.

He then turned more heads on the international stage with a starring role for England at the 2018 World Cup as Gareth Southgate's men made it to the semi-finals in Russia. Within another year, Dele was a Champions League finalist having laid on two goals for Spurs' hero that night in Amsterdam, including the dramatic winner in stoppage time, and was being talked about in terms of a high-profile move to either Barcelona or Real Madrid.

It would prove to be the zenith of the Milton Keynes-born attacking midfielder's career to date, however, as the architect of the Londoners' ascendence, Mauricio Pochettino, left the club the following season and Jose Mourinho took charge.

Mourinho's aloofness and lack of communication is often cited as one of the big reasons for the alarming drop-off in Dele's form from that point on, although the player's own desire and commitment has been seriously questioned even if club insiders doubted the veracity of his "party animal" image. Nevertheless, he fell out of Tottenham's squad altogether under the Portuguese, cutting an increasingly isolated figure at the North London club over the previous 12 months.

An escape route to link back up with Pochettino at Paris Saint-Germain briefly appeared to open up during the 2021 January transfer window but he remained at Spurs and a fresh start under Mourinho's successor Nuno Espirito Santo never coalesced into anything tangible either.

Instead, he came into the winter window of 2021-22 having made just 10 Premier League starts, with a solitary goal scored back in August, and talk that Spurs head honcho Daniel Levy was prepared to listen to offers for him. It would take until transfer deadline day, however, and the appointment of Lampard as manager at Everton for Dele to get his move away.

Lampard was reportedly instrumental in luring Dele to Merseyside and the Blues' hierarchy were able to put together a potentially laudable deal whereby he would join Everton for free, with £10m due following his 20th appearance and further appearance-related add-ons supposedly taking the final price over £30m.

Behind the curve in terms of match fitness having only featured in bit parts for Tottenham, Dele would see minimal playing time as a sporadic substitute for Everton over the remainder of the season as the Toffees waged their battle against relegation. At times, Lampard appeared to imply that he needed to see more desire and application from a faded Spurs star whose appetite for the game had been questioned by pundits and observers in his later days in North London.

“I have had those discussions with him. He’ll be very clear as to where I am and at the moment I’m much more concerned about the collective, getting over the line as a group.

“If Dele plays his part in these three games then great. He’s come on at times and done good things for us. It’s an area of the squad where we have other players that have been playing, that’s just the reality of the situation. He needs to just keep training hard and stay really well focused and fight for the opportunity.”

That opportunity would come when he was introduced as a half-time sub for Abdoulaye Doucouré after Everton had slumped to a 2-0 deficit at home to Crystal Palace in the penultimate match of the 2021-22 campaign and Dele played a major role in changing the turning the game in the Blues' favour as they eventually finished the contest as dramatic 3-2 winners to ensure their Premier League survival.

If question marks still remained over the one-time England international's immediate future, they appeared to be dispelled when Dele switched shirt numbers from 26 to his more recognisable 20 shortly before the new season was about to start but he would make just two substitute appearances in 2022-23 before he agreed to join Besiktas in Turkey, initially on a season-long loan.

The reasons for his failure to kickstart his career at Goodison appeared to be a continuation of the issues over application that he had at Spurs, which seemed to be encapsulated in the talk Mourinho talk had with Dele in his office that was shown on the Amazon Prime documentary, All Or Nothing. In it Mourninho warned the player that he was in danger of letting an incredible career waste away.

Lampard's own comments following Alli's departure for Besiktas echoed Mourinho's when he said: "Having worked closely with him for a period, I have to say he really does need to understand the relation of training and focus at the highest level, to what that means to performance. I actually know on a personal level what training can do and focus can do, and that’s something he really has to take on board.

“He has to do it – every player has to do it. It is too elite, this sport is too elite at the top end. The focus has to be there and if you don’t have it (at this level) it is really really tough – and those are the rules.”

It seemed the change had done him good, with Dele Alli scoring in only his second game for Besiktas. But a thigh injury didn't help and a new manager coming in would provide the slightly damning analysis: "He is below expectations in terms of efficiency."

*First installment due after 20 appearances