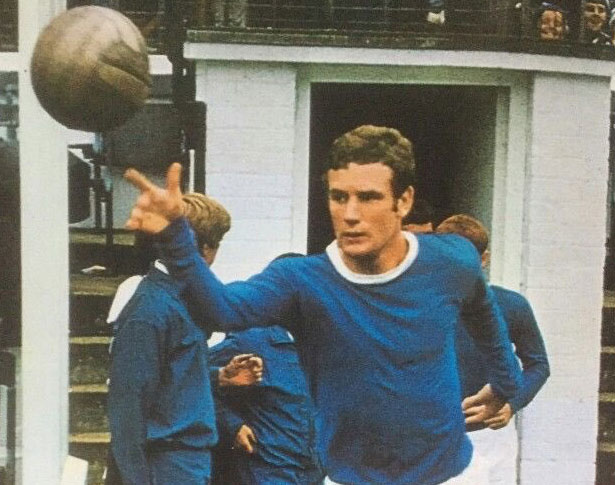 Of all the places to make a senior debut, there can be few places more intimidating than the Stadio San Siro in Milan, especially when the match is a European Cup tie against Internazionale.  Yet this is precisely how an 18-year-old Colin Harvey was introduced to first-team football in 1963, filling the boots of the injured Jimmy Gabriel in the Everton midfield.

Born into a passionately blue family, Harvey in fact tried out with Liverpool before signing with Everton in 1962.  He developed rapidly and proved a mature performer, to the extent that even 90,000 partisan Italians didn't faze him and he let nobody down in that pressure-cooker debut.  However, it was another two seasons before he commanded a regular place in the team, but once in he stayed there.  He was part of the 1966 FA Cup-winning team, scoring a rare goal in the semi-final v Manchester United to clinch Everton's berth at Wembley.  From then on, he was a crucial of player in the rise of the club to Championship status in 1970 as one of the fabled Holy Trinity midfield trio with Alan Ball and Howard Kendall.

Perhaps unfortunately – perhaps not – Harvey's more subtle qualities were often overshadowed by those of Kendall and Ball.  It was well known that he was quick, a fine tackler and fit enough to run from one end of the pitch to the other all afternoon, but it was often overlooked that he had wonderful ball control and a full range of passes.  In fact, cruel though it sounds, Harvey himself was often taken for granted.  The fact that his poorer games were better remembered than his good ones – simply because they were so infrequent – pays tribute to his remarkable consistency.

The one area of his game that was really lacking was goalscoring.  He was perfectly capable of finding the target, but appeared to have little confidence in his ability to do so.  Had he scored more goals it is a fair bet that greater international recognition would have come his way.  As it was he gained a single cap for England when his unwaveringly impressive play surely deserved more.

That consistency eventually began to take its toll on his fitness, and he left Everton in 1974 for a spell at Sheffield Wednesday, where he played well if undistinguishedly for 13 months before an injury forced his retirement.  On finishing his career he took up coaching, and turned out to be a natural at it.

When his former midfield partner Howard Kendall became manager of Everton in 1981, Harvey was the man he chose to assist him, and together they guided the club to four major trophies in three years.

Harvey seemed the ideal man to take over after Kendall left in 1987, but he didn't prove to be as good a manager as he was a coach.  He was sacked in November 1990, but immediately re-hired by the returning Kendall. It still wasn't as good second time round, and both left once more in 1993.

In June 1997, Harvey returned to the club to manage the youth team, guiding them to victory in the 1998 FA Youth Cup.