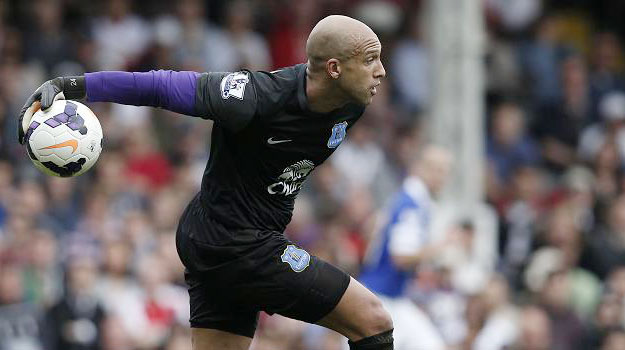 Tim Howard was signed by David Moyes in late May 2006 on a one-year loan deal from Manchester United as concerns grew that Nigel Martyn would not fully recover from a hairline fracture in his ankle that brought a premature end to both his 2005-06 season and, ultimately, his career.

With Moyes already doubtful of Richard Wright's ability to fill the void left by Martyn, reinforcements between the sticks were seen as one of three priorities during the 2006 close season alongside central defence and attack.

Born in North Brunswick, New Jersey, Howard started his career in Major League Soccer with the New Jersey Metrostars and was there for five seasons before Sir Alex Ferguson earmarked him as a potential solution to what had become a problem position a Old Trafford.  With Fabien Bartez leaving United, Howard was signed in the summer of 2003 and joined rival Roy Carroll for £2.3M.

Unfortunately, the American's attempts at making the first-choice 'keeper spot his own were undermined by some key blunders and, along with Carroll, he wasn't considered good enough for Manchester United.

Despite that, Howard did make 77 appearances for the Red Devils before the arrival of Dutch international, Edwin van der Saar, from Fulham on a two-year deal.  Van der Saar immediately became first choice at Old Trafford, relegating Howard to the role of understudy.

The United States international then had a new lease of life at Goodison Park.  After signing he said “ I am really looking forward to playing first-team football and the new challenges that that will bring”.

A sufferer from Tourette's Syndrome, Howard certainly proved a big hit with the Everton fans, putting in some solid performances that underwrote the Blues' fine start to the 2006-07 season.  There were soon cries for the loan deal to be made permanent as the confidence he gave the defence was tangible.

Cracks started to appear in the odd game toward Christmas, however, as Everton slipped down the table from their early lofty perch.  Howard did well to reassert his confidence and domination of the penalty area, though, getting back on track in the New Year with plenty of clean sheets as Everton built an impressive positive goal difference.

The clamour to sign Howard permanently became deafening in the January transfer window but it wasn't until Valentine's Day that a five-year deal was announced, for an "undisclosed" fee, believed to be around £3M. Though it was initially reported that he would remain on loan until the summer and then sign permanently, it later transpired that he became an Everton player on 14th February 2007 and was eligible to play against his old club, United, but Everton agreed not to under the terms of a "gentleman's agreement".

The following season (2007-08) same Howard come tantalisingly close to equaling Neville Southall's record of 15 cleans sheets in a league season (1995-96), giving Everton once again a 'keeper they could trust between the sticks.

He largely kept that reputation intact despite being the subject of accusations from some fans that he is suspeptible to high balls, and well-struck shots form distance, that seem to catch him unawares.

And then, after a mostly successful World Cup with the USA National team in South Africa where the Americans won England's group but went out to Ghana in the Quarterfinals, there was that horrendous gaffe in the first game of the season that lost Everton the game at Blackburn.

Still, his manager kepth faith in Howard despite the arrival in the summer of 2010 of another international 'keeper in the form of Jan Mucha and Tim went on to appear in all of the 2010-11 Premier League games and most of the cup games. He also became something of a spot-kick hero, with a number of brilliant penalty saves.

Indeed, Mucha was unable to shift Howard from the first-choice goalkeeping slot in 2011-12, the Slovakian doing his prospects few favours with an awful error in one of his few cameos against Chelsea in the Carling Cup. Everton ended up losing the game 2-1 in extra time amid criticism of Moyes from some fans and pundits that the strongest line-up should have been selected against such strong opposition.

With little threat to his first-choice status, Howard comfortably retained his place in the Everton side and would even score a rare wind-assisted goal in a League game against Bolton in January 2012, though question marks about a lack of aerial command of his area and propensity to flap at long-range shots and set-pieces remained.

Moyes showed his continuing faith in the American, though, when he gave him a four-year contract extension in 2012 that would take him through to 2016 and past his 37th birthday. But still the clean sheets were few and far between, even though he was creeping up on Brad Freiodel's incredible uninterupted run of games in teh Premier League.

That was until he was crunched in the FA Cup replay with Oldham, but it was more than a week before Everton figured out the player had broken two ribs in his back, with Jan Mucha finally stepping up.

With the arrival of Roberto Martinez as Everton's manager – and, more specifically, goalkeeping coach Iñaki Bergara – in 2013/14, Howard's form showed significant improvement as the Blues mounted a challenge for Champions League qualification in the Spaniards' first season at the club.

He was part of a rearguard that was among the stingiest in the Premier League that season and his performances and value to the club in terms of his influence on younger players was recognised with a further two-year contract extension which he signed in April 2014.

Howard took that excellent, if occasionally enigmatic form, to Brazil and the 2014 World Cup, where he would become a hero in the Round of 16 game that saw him make a record total of 16 crucial saves to keep US belief alive into extra time, only for – who else? – but Romelu Lukaku to fire past him for Belgium's dramatic winning goal. Strangely, the saves were best described as 'routine'; none were that outstanding, but this didn't seem to matter...

Immediately following those exploits, Howard announced he was taking a one-year sabbatical away from International football to spend more time with his family. And if that portended a relaxation in focus, it played out rather unfortunately over the first half of the 2014-15 season with the American to blame for an uncharacteristic catalogue of individual errors and erratic form as the Blues struggled to reach the highs of Martinez's first season in charge.

Off the field, Howard courted headlines of a different sort when he claimed in his autobiography that fellow US goalkeeper Brad Friedel had “actively tried to block” his original move from the New York MetroStars to Manchester United in 2003, an accusation Friedel denied and Howard eventually backed down: "I have decided to take Brad at his word."

A torn calf muscle in the first half at Stoke City on Boxing Day 2014 sidelined him for two months, finally giving his understudy Joel Robles a chance to prove his mettle.  Which is just what the young Spaniard did, after a stuttering start, ending with an impressive run of three clean sheets before Howard was declared fit and, as the senior player, immediately reinstated by Martinez to the prime spot between the sticks.

Though it was a highly controversial decision among many supporters, Howard rewarded his manager's faith with generally improved performances through the end of the season, with fewer of the embarrassing errors evident and four clean sheets in the last 14 games.  And while many fans demanded that a new keeper be brought in during the close-season, it was Howard who started the new Premier League season in goal for Everton – his 10th with the club.

Now aged 36, Howard's form remained under scrutiny in a season that promised much but had, by the midway stage, failed to live up the expectation generated by Martinez's talented squad. The veteran's lack of command of his area and vulnerability to aerial balls and set-pieces was becoming an increasingly contentious issue for supporters, who felt that Robles had done enough to warrant an extended run in the side to prove that he was now the superior 'keeper.

While his relationship with fans at Goodison deteriorated, his manager would continue to insist that Howard's experience and influence in the dressing room was paramount, while the American himself insisted that the criticism was of no concern to him:

"The criticism from fans and media doesn’t mean anything. It gets blown out of proportion. Strong-willed, good players don’t buy into that nonsense. When all is said and done, my numbers and record will speak for themselves, and I don’t mean that in a historic standpoint. I mean that right now. Look at the Premier League, look at my stats for this season. It’s water off my back. It’s not something I concern myself with."

The situation found some resolution in early February 2016 when injury to Howard forced Robles to take over in Premier League games to parallel his FA Cup run, where he had not let in a goal.  Results were still mixed, with the dreadful home form only getting worse, while Howard revealed he would make a  strongly rumoured move back to the States as he agreed to join Colorado Rapids from May.

Robles played most games in goal during the second half of the season. Results and the disconnect between Martinez and the players noticeably worsened but the Spaniard had assumed the mantle of Everton's "No.1" by then, although the manager did allow Howard to play in the two final home games at Goodison Park to bid the home fans an emotional farewell before he departed for his swan-song in MLS.