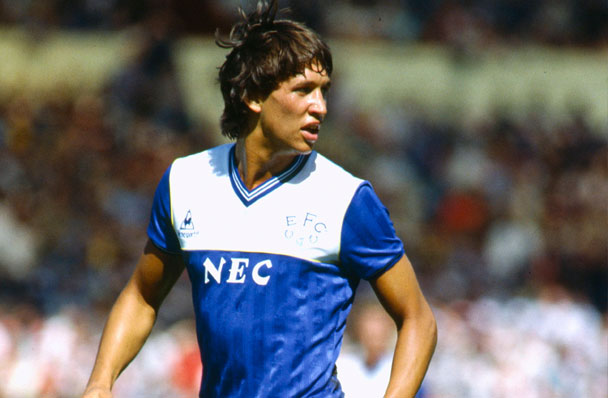 On arriving at Goodison Park in July 1985, Gary Lineker had a similar problem to the one Joe Royle faced at the start of his Everton career, except to a greater extent.  The difference lay in the fact that while Royle only replaced fans' favourite Alex Young for one game, Lineker's £850,000 arrival from his home-town club Leicester City led directly to their then idol Andy Gray actually leaving the club.

It was nearly Christmas by the time Lineker won over the Everton crowd-astonishing, given his phenomenal strike-rate of 38 goals on 52 games over the season.  But Gray, the talismanic catalyst for the rise to the peak of European football, was a hard act to follow.

Andy Gray and Graeme Sharp had shot Everton to the League Title and the Cup-Winners' Cup the previous season, and the fans' outrage at his replacement was perhaps understandable.  Not that it can have affected Lineker very much, so freely did he score, and his goals looked like driving Everton to match those achievements – only for the blues to end up even bluer as they were pipped by Liverpool in both the League and the FA Cup.

Lineker was a finisher rather than a creator of goals, as was borne out by his World Cup performance that summer.  He finished the tournament as leading scorer with six, all of them finished from within ten yards taking a maximum of two touches.  Indeed, he owed a large debt of gratitude to the likes of Kevin Sheedy, Trevor Steven, Peter Reid and particularly his striking partner Graeme Sharp.  The between them were responsible for making the vast majority of his goals for Everton with precise crosses, incisive through-balls taking advantage of his searing pace, or in Sharp's case by flick-ons or lay-offs.  Despite Everton's painful failure to win any silver, Lineker was rewarded for his contribution by both his fellow professionals and the Football Writers with Player of the Year awards.

He stunned the Everton fans that summer by leaving in a £2.75m transfer to Barcelona, where he kept up his prolific scoring record and won the Spanish League and the Cup-Winners' Cup, before following the man who took him there, Terry Venables, to Tottenham.  From there he moved in 1992 to Nagoya Grampus Eight in the embryonic J-League in Japan, but a persistent toe injury prevented him from making any significant impact and he retired from playing to concentrate on a broadcasting career.

The sad thing about Lineker, the thing that most grates now with Everton fans, is his dismissive attitude to the club that set him on his way as the highest-profile English player of the late 1980's.  To listen to him now, spouting his fawning platitudes of Spurs, you'd think he never wore the Royal Blue of Everton.