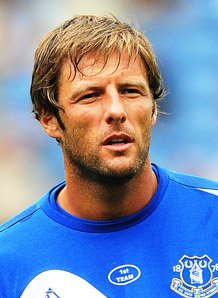 Perhaps more than any other position, David Moyes has hired and fired a number of goalkeepers in his time at Goodison.  Having added the name of Stefan Wessels to that list at the end of the 2007-08 season,  and being clearly uncomfortable relying on the raw talent of either Iain Turner or John Ruddy, David Moyes snapped up ageing veteran Carlo Nash, third-choice keeper at mighty Wigan Athletic.

Nash would later say "I jumped at the chance. I wasn't getting any younger and it was the chance to play for someone I had supported as a kid."

Despite his advanced age (36), Nash was given a two-year contract (with an optional third) — though it flew in the face of the tacit "No Over 30s" policy that had seen Lee Carsley dispensed with for the sake of a similar contractual arrangement, the journeyman shot-stopper did at least provide experienced cover.

Nash's first season at Everton was spent warming the bench: literally. With Tim Howard playing every minute of every senior game, Carlo Nash was on the sub's bench for all except one – a Carling League Cup game at Blackburn – he was cup-tied, having already appeared for Wigan.

The next season finally saw Nash make his debut for Everton after sitting on the bench unused for 65 games.  He made his Everton debut in the dead rubber Europa League game against BATE Borisov when David Moyes chose to rest most of the senior team and go with his reserve and academy players.

That would be his only senior appearance in an Everton shirt. His contract expired and he left to join Stoke City in the summer of 2010.