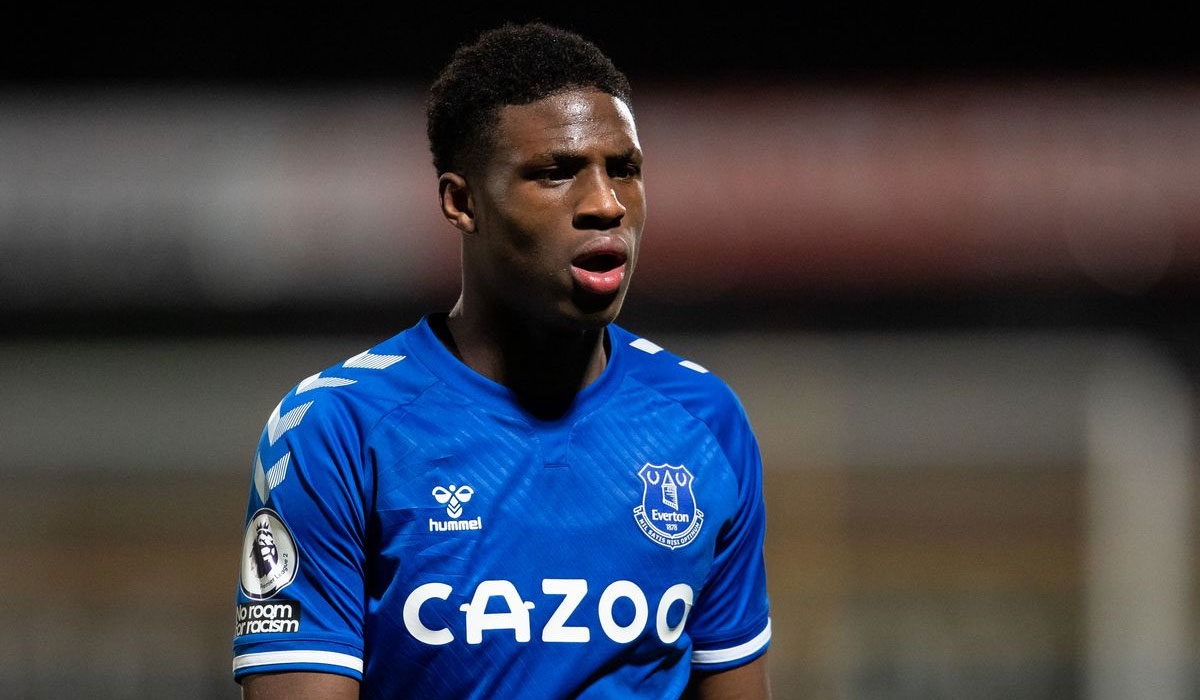 Everton signed Thierry Small from West Bromwich Albion when he was just 11 in what was considered to be something of a coup in youth level football where he was already being coveted by scouts from a number of top clubs. His footballing pedigree includes his uncle, Bryan Small, who played for Aston Villa.

Having come to prominence when he was featured on the BBC's Wonderkids series, Small graduated from the Everton Academy to feature in a handful of U18s games in 2019-20 before the season was cut short by the Covid pandemic. He would go on to have a very impressive season for both the U18s and the U23s in 2020-21.

The talented 16-year-old defender then became the club's youngest ever player in 2021 when Carlo Ancelotti brought him on in place of James Rodriguez for the last 5 minutes of Everton's FA Cup 4th Round tie with Sheffield Wednesday in January 2021.  At the age of 16 years and 176 days, he broke broke Jose Baxter's 2008 record by 15 days.

By the end of the season he had been capped by England at youth level and received his first call-up for the Three Lions’ Under-19s squad and his FA Cup cameo under Ancelotti came only 3  months after his first appearance for the Everton Under-23s, a 0-0 draw with Tottenham Hotspur in October 2020. Thierry scored his first goal for the Under-23s in a 2-1 win over West Ham United the following December and scored again for David Unsworth’s side the day after his Goodison Park first-team run-out.

Everton fully expected their new young protégé to to become the next in a long line of Academy products to graduate to the first team but, for reasons that had not come to light by the time he left the club, Small had other ideas. He failed to turn up for pre-season training in July 2021 and Everton were unable to successfully negotiate a first professional contact for when he turned 17 at the beginning of August.

Small seemed unconvinced that there was a suffciently short pathway to first-team football at Everton, with Lucas Digne firmly blocking his way and Niels Nkounkou deemed to be ahead of him in the pecking order. He turned down the professional contract Everton offered and cancelled his Scholarship Agreement to became a free agent, eventually signing up with Southampton, whose proffered compensation payment to Everton for their part in his development of only £1.5m was rejected out of hand.

Speaking after the fact, David Unsworth stressed that Everton did everything they could to keep hold of the starlet, but ultimately it was his decision to move on to pastures new.

“In fairness to the club, we did everything we possibly could [to keep him]”, Unsworth told the Liverpool Echo. “We made him an unbelievable offer; we didn’t want him to leave.

“We never envisaged it coming.  Up until he actually did leave, we fought really hard to keep him.  But, when a player doesn’t want to be at your club, it’s very difficult to try and keep him. He’s got his way, and that’s usually the case these days.”

While Small started his first game for Southampton’s Under-23 team in Premier League 2 in September 2021, he was still awaiting his senior Saints debut in early 2022 while, ironically, Nkounkou was out on loan for hte season in Belgium and Digne had been sold to Aston Villa.