Coady: I want to keep playing 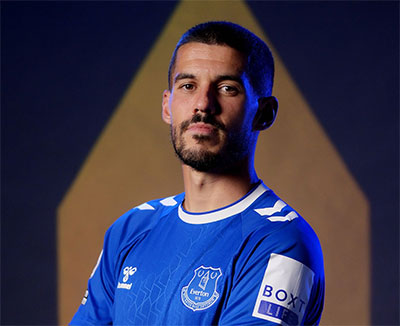 Conor Coady has played down the notion that his primary reason for leaving Wolves was to enhance his World Cup prospects, insisting that he just wants to play regular football.

The St Helens-born defender left Wolves after seven years as a mainstay in the Midlands club’s side to join Everton on Monday after a fast-moving negotiations saw the Blues secure him on a loan deal with an option to buy.

Coady has found himself on the opening day of the new season in the unfamiliar position of the substitutes’ bench as Wolves kicked off 2022-23 at Leeds.

The 29-year-old had been virtually ever-present for the club and an integral part of a three-man central defence under Nuno Espirito Santo but, after a year in charge at Molineux, new boss Bruno Lage made the decision to switch to a back four, with Max Kilman and recent acquisition Nathan Collins the preferred starters in that formation.


That prompted Coady to sound out opportunities elsewhere and if his comments since arriving at Finch Farm are any indication, the one-time Liverpool player is made up to have the opportunity to join Everton.

“The last five or six weeks have been tough at Wolves, if I am being honest,” he told Joe Thomas of the Liverpool Echo. “I could feel maybe I wasn't going to play as much as I had done. I have played every game bar one or two for the last four or five years and I think it's been something where I don't want that to stop now, I want to play even more, I want to play even more games. Getting that feeling was tough to take.

“I want to keep on playing. I want to help this club move forward. What will come will come but I just want to focus on playing football now and that is for this fantastic club.

“In terms of the welcome I have had here, it's been amazing. It is everything I thought of and more if I am being honest — the club is instilled with fantastic people.

The lads have been outstanding but I think every single staff member around the place as well, and I am not just talking about the staff that deal with the first team — I mean the stewards, I mean the people in the canteen — everybody is just so, so welcoming. It's been a bit of a whirlwind but I have loved every minute.

“Coming in here, I love training with the boys and I love recovering after. I have loved spending my time here the last couple of days. It is important we keep on building on that because we are only here for one thing and that is to make the club better.”


Colin Glassar
1 Posted 12/08/2022 at 17:29:55
I’m starting to warm ever so slightly to this lad.
Peter Moore
2 Posted 12/08/2022 at 17:30:00
It's great that this proven superb defender and superb leader is feeling so at home already. He clearly knows we need to improve fast and here's hoping we get a quality cutting edge up front to match the improvements in the back line and midfield.

When Calvert-Lewin and Richarlison were out previously, we were severely blunted in attack. Surely the board won't let Frank and the whole club and all the fans down by failing to replace Richarlison with a real goal threat and a player that can be effective when Calvert-Lewin is out, as he seems to be more often than not for more than a year.