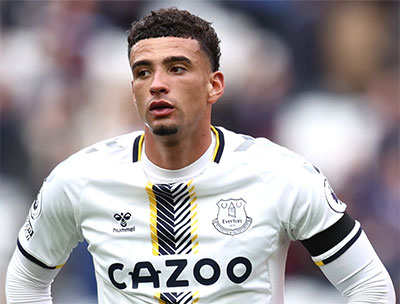 Ben Godfrey got 75 minutes' worth of action under his belt when he turned out for Everton's U21s today as he continues to work his way back from the leg fracture he suffered on the opening day of the season.

The defender was involved as the development side were held to a 1-1 draw by Birmingham City U21s in the Premier League Cup.

Striker Francis Okoronkwo opened the scoring at Haig Avenue but the visitors hit back late on when Pharrell Williams grabbed an equaliser.

Godfrey is on course to be fit for the first-team's first Premier League match when the season resumes after the World Cup on Boxing Day when Everton take on Wolves.


However, the club are still waiting on a full diagnosis of Yerry Mina's latest hamstring injury. The Colombian sustained the problem in the game against Celtic in Sydney last Sunday.

Meanwhile, it was announced yesterday that James Garner faces a couple of months on the sidelines with a back injury.

Roman Dixon has reverted back to being called Roman Quintyne. First game at this level for Cody Ebere, Owen Barker, Matthew Apter and Callum Bates.

So this is how it feels like when you're in a room without a roof.

With him back, we have quite a few options across the back in whatever formation the manager goes with.

Now to add midfield and forward options. Simple isn't it?!!

Bryan Houghton
5 Posted 26/11/2022 at 12:06:33
Watched the game yesterday on youtube - bumped into it by accident browsing, but actually enjoyed the game tbh. It was good to see Ben back - altho he clearly (and understandably, with his experience and age) has an air of authority the other lads didnt have, he wasnt necessarily the stand out players on the day.
In fact it was Barker who really stood out. I think (tho could be wrong) moved up to U21's from 18's, in the absence the likes of Price and other U21's in Australia.
Impressive game, very assured. Controlled midfield. Playmaker. Hope to see more of him.
Phill Thompson
6 Posted 26/11/2022 at 13:56:46
Bryan, yes I enjoyed the game too. The guy who stood out for me was Isaac Heath, another u18 playing in midfield and a bundle of energy moving the ball forward. He was deeper than he usually plays and got more of the ball. It’s always nice to see the youngsters stepping up an age group, although it can initially be a bit of a leap to make.
Ajay Gopal
7 Posted 26/11/2022 at 14:11:55
We have an overload of CB options (when everyone is fit):

Of the lot, Keane and Holgate are the most saleable assets. Mina will see out his contact at Everton, unfortunately because of his injury, otherwise we could have got/ saved some money from his transfer.

We should get about 10-15 million from selling one of Keane and Holgate. If we can get the Moise Keane also early, Thelwell should go all out to get a quality striker along with a loan signing (Hazard? After all, Carlo owes us one).

Does anyone know when the draw for the Third Round is?

Apparently the draw is on Monday. Takes you back to the days when you used to bunk lessons and crowd around the lad who had a transistor radio, listening in.

Downside: the draw is being made at our old ground…

Certainly I would expect some current 'underachievers' being moved out in January but the ones who are under the microscope may hang around if they cannot get the big contract elsewhere through their money-grubbing agents.

This seems to be the stumbling block with many Everton signings over the years. We can't get rid of them!!!

Doucoure I can see getting a club. I don't know about Mina. It certainly appears his legs are shot.