Patterson facing another six weeks out 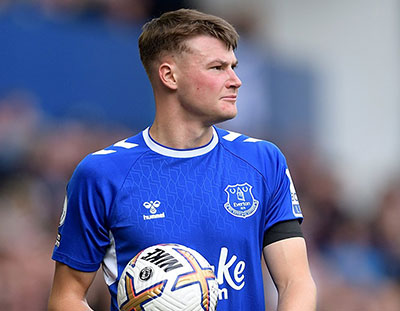 Nathan Patterson sustained medial knee ligament damage in Tuesday evening’s defeat to Brighton and will be out for six weeks.

The Scot was withdrawn in the second half of the 4-1 loss and Frank Lampard delivered news of an initial diagnosis after the game that has now been confirmed.

Patterson missed the end of last season with an ankle problem that required surgery and had a 6-week spell on the sidelines prior to the World Cup.

News of his latest layoff was confirmed by Lampard at the press conference ahead of tomorrow's FA Cup 3rd Round tie against Manchester United.

I don't think he's all that good at defending to be honest, not yet anyway.

So it's back to our 34-year-old right-back or another square peg in a round hole.

I've lost hope of any survival this season anyway, it's hard to even get worked up about anymore when we've all been able to see relegation coming for a good 12 months, all apart from the board clearly.

Seamus is not an answer to any question other than shoring up in the last 10-15 against the likes of City. We need some competition for Nathan to push him on. Wan Bissaka on loan from Man Utd instead of yet another winger in Elanga would be my call.

John Hall
6 Posted 04/01/2023 at 10:24:11
The lad was hung out to dry last night and received no help down his flank. Yes, he was narrow for the first goal but was trying to cover space that should have been closed long before he was tempted to try and cut out the ball.

Young and inexperienced and shafted by a manager who is clueless in how to set up a midfield. The team had no legs, no pace and no one who could put in a tackle. When has Iwobi ever won a tackle? When did Davies ever command a midfield?

Gana… well, best to leave it at that. Plays as if he is still in the French league which is piss poor having watched it for nearly 6 years while working in France.

15 minutes into the game and both fullbacks so narrow it was like they had 5 - 6 forwards just passing it through midfield or spreading it wide.

Yes, seems a bit injury prone but has been rushed in as we have never replaced Coleman as is the case with Richarlison, Lukaku etc.

Potential does not always develop as quickly as we would like but to put the emphasis on a young lad trying his best as being a weak link is pretty unfair as he gets exposed by the complete load of shite playing in front of him.

He will be a star in the Championship!!

Yes, he was at fault for the first goal but was one of the very few to try and attack with purpose, asking for the ball and endeavouring to do something with it.

Eddie Dunn
8 Posted 04/01/2023 at 10:51:58
As well as having little protection from his winger or midfield, the team was playing a four across the back a few days after playing a five at City. The cross came from their right and Brighton got right between our "lines". Coady is on Patterson's inside, so why wasn't the player closed down?

Patterson is not the finished product but he has pace, some fight and has an eye for goal. He needs to work on his defending – he has time.

Not sure I'm watching the same player as you if you think Nathan Patterson has "an eye for goal".

I know he's been injured a lot of the time he's been here (typical Everton player?) but the only time I've seen him nearly score was being one on one with the keeper at Leeds which he should have buried.

Call me old fashioned but in terms of defenders with an eye for goal, Mountfield, Lescott, Baines, Coleman in his younger years ect ect.

Still has time Patterson but he seems a bit fragile to me injury wise.

He's been rushed in ahead of his time because our club is chaotic. Is he any good? I'm not convinced but he's certainly not quite ready for the PL. As for the injuries, they're not the kind that I would describe as anything other than bad luck and as such you can't read too much into them.

Hopefully he gets back, stays back, and then starts performing; otherwise, we'll be looking again for another full-back.

Those two are dog shit. If you put those two in any team, with a smattering of Maupay, Keane or Holgate - I'd say put your mortgage on the opposition to solve UK cost of living crises.