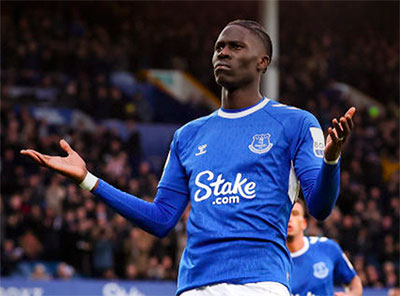 Everton lost a fourth successive home fixture for the first time since 1958 as bottom club Southampton came from behind to win a game that was played out against the backdrop of supporter discontent and a vacant Directors’ Box.

With a protest at the Board’s leadership of Everton planned for after the final whistle, the club released a statement before the match saying that its directors had been advised to stay away from Goodison Park due to a “credible threat” to their safety.

Meanwhile, on the pitch, the mess that the Blues have become under Farhad Moshiri’s ownership was laid bare once more, with Frank Lampard powerless to prevent his charges from slumping to what was their seventh defeat in eight games despite taking the lead through the imperious Amadou Onana.

The Belgian, so impressive in defeat at Manchester United in the FA Cup eight days ago, was brilliant again today and was rewarded with a goal from a towering first-half header that should have been the platform from which Everton could have gone on to win the game.


However, yet more calamitous defending and a mindless challenge from substitute Anthony Gordon that set James Ward-Prowse up for the winner saw the lead evaporate and the Toffees descend into crisis on and off the pitch.

Despite being stretchered off at Old Trafford with what looked to be a nasty ankle injury, Alex Iwobi returned to the starting XI along with Dominic Calvert-Lewin who came off the bench in the Cup tie as Lampard retained faith in a back five formation.

And while there wasn’t much fluidity to their play in what was an occasionally scrappy affair, the early signs were decent enough for the hosts, with Calvert-Lewin guiding a header towards Gavin Bazunu that was comfortably caught and Demarai Gray ending up on the end of a nice move but his shot cleared the crossbar from a tight angle.

Southampton, who came into the fixture on a two-game winning streak in the cups, one of them an impressive quarter-final victory over Manchester City, almost capitalised on yawning gaps in Everton’s back line in the 21st minute but the chance was eventually snuffed out.

But they came perilously close to scoring a few minutes later when Ward-Prowse fed the ball to Mohamed Elyounoussi and his shot too a heavy deflection off Vitalii Mykolenko, looped towards the far post but eluded Che Adams and dropped wide.

Mohammed Salisu met the resulting corner with a header but Jordan Pickford parried it on the line and the danger was averted before Idrissa Gueye was muscled off the ball in midfield and Danilo’s subsequent shot drifted over the crossbar.

Everton broke the deadlock, though, with seven minutes left in the half. Some neat footwork from Demarai Gray ended with his attempted cross being blocked behind and from the winger’s corner, Onana fought his way to meet the in-swinger and planted a downward header home off Bazunu’s glove.

It was his first goal for the club and a potential mood changer if Everton could have hung on but after Pickford had been forced into a stoppage-time save, pushing a Ward-Prowse shot onto the post at the end of the first half, they had tossed the lead away with less than a minute gone of the second.

A simple Adams flick-on past James Tarkowski found Ward-Prowse in plenty of space to draw a sliding block attempt from Ben Godfrey and then stroke the ball past the helpless Pickford to make it 1-1.

Everton briefly rallied, with Iwobi’s tenaciously to chase down Pickford’s long ball but Gray spurned the opening with a tame 25-yard shot while a marauding run by Godfrey saw him set up Calvert-Lewin just outside the box but his shot took a vital deflection off a defender’s out-stretched leg and smacked off the underside of the crossbar and away from goal.

With 20 minutes to go, Godfrey came very close to opening his own account for Everton when Onana curled a teasing ball into the box that Bazunu could only get his fingertips to but it was enough to deceive Godfrey at the back post who couldn’t adjust in time to barrel the ball past the right side of the upright.

Lampard had tried to change the course of the game by throwing Gordon for Seamus Coleman but instead of making the difference at the Gwladys Street End, he played an important role in Southampton’s winner with a clumsy and needless foul on Adams that gave the visitors a free-kick in prime Ward-Prowse territory.

With Pickford and his wall all at sea, the one-time England man simply picked his spot and drove the ball into the left-hand side of the goal as the goalkeeper stood rooted to the spot.

The closing stages were desperate from the Blues as they vainly tried to plunder an equaliser with Ellis Simms introduced for Gueye but though they got into a couple of good areas for Gordon to send in crosses and Tarkowski tried to steer a loose ball home from about 12 yards out, they didn’t really look capable of scoring a second.

For the third time since Christmas, the players left the Goodison Park pitch with the frustration, ire and boos of the fans in their ears before the demonstrations of disaffection with an absent Board took centre-stage behind the Gwladys Street goal.

Change may well come at the club in the coming days with Lampard’s days as boss surely numbered. Everton urgently need an injection of goals in the transfer market and a change in ideas in the dugout.

Off the pitch, it’s hard to see the kind of wholesale shifts in culture and leadership that is required coming in time to stave off relegation to the second tier for the first time in 72 years.