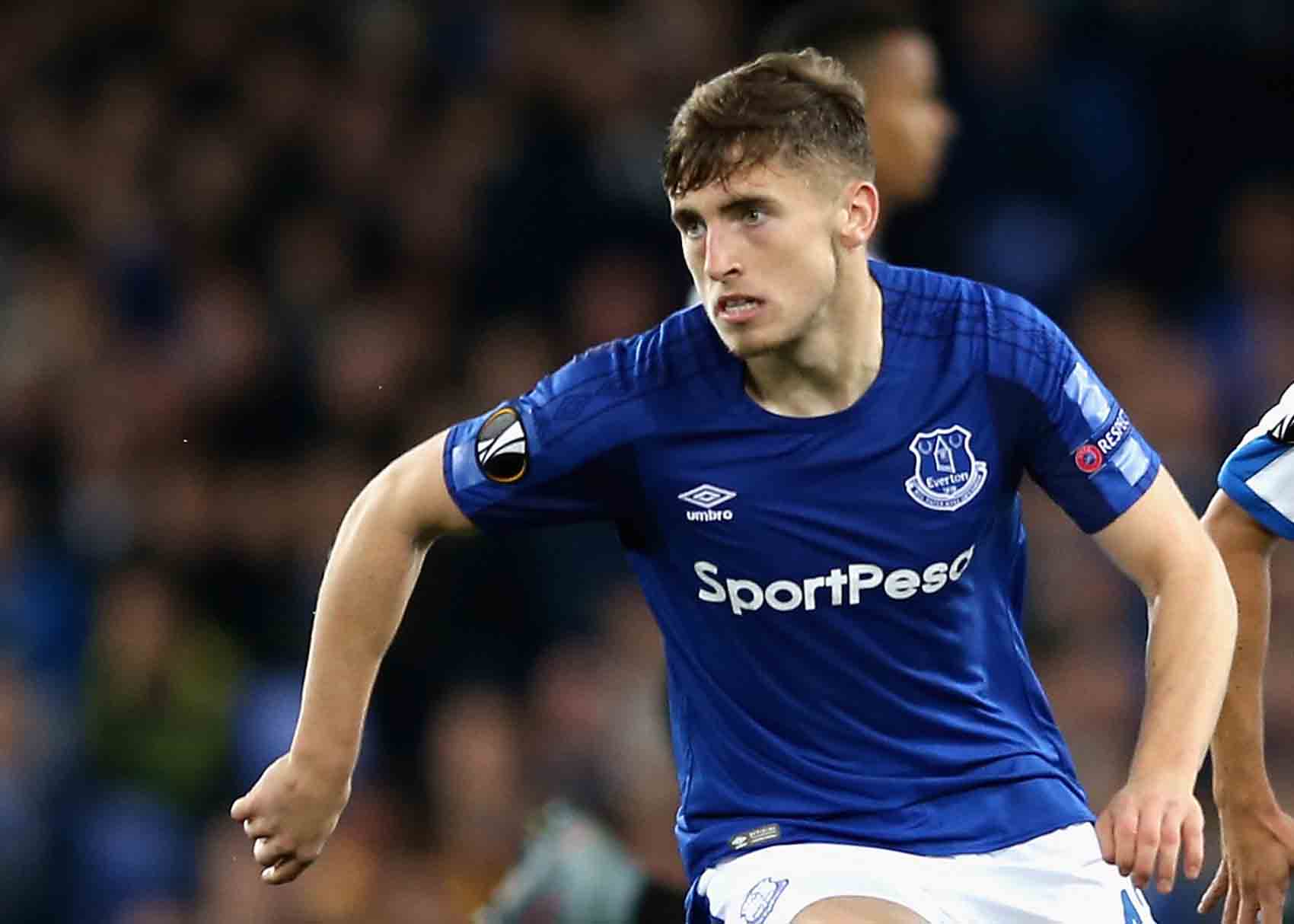 Jonjoe Kenny first joined Everton's Academy aged nine and worked his way through the club's ranks, developing as a midfielder, centre-back and then a full-back by the time he reached U18 level in 2013-14. At 17, he signed his first professional contract with the club, a 3-year deal, in July 2014 and would make only a handful of appearances for the U18s, being accelerated to the U23s.

An England youth, he represented his country's Under-17s in the 2014 European Championship Finals and won the trophy alongside his Finch Farm team-mate Ryan Ledson, scoring the winning penalty in a shootout to decide the final against the Netherlands.

He was named on Everton's senior team sheet came alongside a number other youngsters in the Europa League dead rubber against FK Krasnodar in December 2014 and he made a substitute's appearance in the first match of pre-season 2015 at Swindon Town and helped set up one of the goals in a 4-0 win before going out on loan to Wigan Athletic.

He was recalled early from that spell, a decision that disappointed Latics boss Gary Caldwell but later joined Oxford United in January 2016, initially on a one-month loan that would be extended to the end of the season. He would  make short work of convincing the Us fans that they wouldn't miss popular right back George Baldock too much in the coming weeks whom Kenny replaced.

Kenny made his first start in the Johnstone's Paint Trophy southern area final second leg against Millwall, a game that Oxford lost but earned their place at Wembley by winning 2-1 on aggregate. Kenny, has also been earning rave reviews on the back of his full debut in which he was named the Us' Man of the Match.

Jonjoe went on to play a crucial part in Oxford United's mission to gain promotion as they finished second in League One and returned to Everton in time to make his senior debut in the final Premier League match of the 2015-16 season against Norwich City under caretaker manager David Unsworth.

Kenny continued to impress at Under-23 level as the new season got going, and must have caught the eye of the new first-team manager, Ronald Koeman, who surely approved the decision to give him a new three-year contract running through June 2019.  But it took a long time for him to be considered for the first team under the new manger, allowing him to captain the Under-23s to a splendid success in winning Premier League 2 under David Unsworth.  It wasn't until April and the horrific broken leg suffered by Seamus Coleman that Kenny came into the squad but he still had to be content with a place on the bench.

He would get a 15-minute cameo in a League game at Swansea but came to the fore for England U20s in the World Cup in South Korea in the summer of 2017 where he put in some tremendous performances, showing himself to be great going forward and covering his duties at the back with intelligence. Playing every England game, he was a strong candidate for the Player of the Tournament that ultimately went to then Chelsea striker Dominic Solanke.

There was huge expectation that Kenny would be rewarded for his efforts with some senior run-outs at right-back while Coleman continued his recovery from a broken leg but Koeman preferred Cuco Martina, his free acquisition from former club Southampton. Kenny again had to bide his time but was given the odd chance in the League Cup and Europa League before Koeman gave him his Premier League debut at home to Arsenal in what would become a watershed moment for the club with regard to the Dutchman's failing tenure.

Koeman was sacked the next day and caretaker manager David Unsworth installed Kenny in the starting role at right-back. The youngster grabbed his chance with both hands and, at least initially, continued in his new first-team role under Koeman's permanent successor, Sam Allardyce. It was no surprise when Everton secured new long-term deals for Kenny, along with Holgate and Calvert-Lewin, in early December 2017.

Kenny was demoted back to the bench under Allardyce when Coleman returned to fitness in February 2018 and that continued to be the case under new manager, Marco Silva, the following season, who used Kenny sparingly when the Irishman was unavailable.

Kenny seemed to fare well when selected but there were rumblings as that season came to a close that the then 22-year-old might be farmed out on loan in 2019-20 with Silva and Marcel Brands in the market for a top-quality, long-term replacement for Coleman. Though it didn't happen that summer, Kenny was indeed loaned out for the season, this time in the Bundesliga with Schalke 04, for whom he would play over 30 times gaining valuable experience.

Though his parent club had elected not to keep their own loan signing, Djibril Sidibé, in the summer of 2020, Kenny's future at Everton was unclear when he returned to Merseyside, with speculation in the press suggesting that he might be sold rather than retained to compete with Coleman for the first-choice right-back role. However, squad number allocation seemed to indicate that new manager Carlo Ancelotti was looking for more from Kenny when he was given the No 2 shirt at the start of the 2020-21 season and an early starting opportunity in a Carabao Cup tie against Salford City.

But Kenny suffered an ankle injury in the game and was forced to spend a month on the sidelines; on the rare occasions when he got minutes once he had regained fitness, he wasn't sufficiently able to impress his new manager at Everton. In January 2021, Jonjoe secured a loan move to Celtic and the prospect of more first-team action north of the Border.

He made 16 appearances in Scottish League and Cup competitions over the next 4 months, with some encouraging reviews and some less so.

“Celtic was a difficult period for me, off the pitch, especially,” Kenny would later reveal. "but having close family and friends and my agent and good mentors around me, and choosing that path and having these people who can really help me progress, changed a lot of things for me mentally.

“I have had a lot of ups and downs but it is about staying at it and doing what I need and focusing on me.”

It seemed unlikely that he had done enough to change the perceptions at Finch Farm and another season of uncertainty lay ahead for the final year of what was expected to be his last Everton contract, with some interest rumoured from Arsenal that then seemed to evaporate.  n enquiry was reportedly made by Silva's Fulham about Kenny's availability late in the Summer 2021 transfer window but Everton had been unable to secure a better stand-in for Seamus Coleman at right-back and Kenny was denied the chance of a move.

Consigned to the bench under yet another new manager in Rafael Benitez, Kenny, now 24,  would sit out all but one of the first 16 Premier League games in the 2021-22 season as an unused sub – getting a paltry 10+ minutes in a poor defeat at Aston Villa in September.

A combination of injuries and sickness in the squad would finally force Benitez to give Kenny and a handful of other youngsters a full Premier League game at Chelsea in December 2021, and he acquitted himself well in a very creditable draw at the home of the European Champions. Kenny was surprisingly effusive about guidance from his very conservative manager:

"It's amazing how much he goes into detail and what passion he has for football. Even if I am not currently playing, I am learning new things as a footballer every day."

Kenny, though, would only play one more game under Benitez before the failing Everton manager was finally relieved of his duties and an injury to Ben Godfrey would give Kenny an unusual opportunity to impress new manager Frank Lampard, by playing left-back against Leeds United in what would be his best display in a Blue shirt.

Lampard was impressed with his commitment, attitude and versatility and he called upon the local lad on a number of occasions during the fraught season run-in that saw the Blues narrowly escape relegation. Those qualities were what prompted the new manager to recommend that Jonjoe be offered a new 3-year contract in May 2022 but the player would turn that down and go out as a free agent to seek a fresh opportunity elsewhere.

On the back of his successful loan with Schalke in the Bundesliga, Kenny would return to Germany in July 2022, this time signing a 3-year deal with Hertha Berlin.