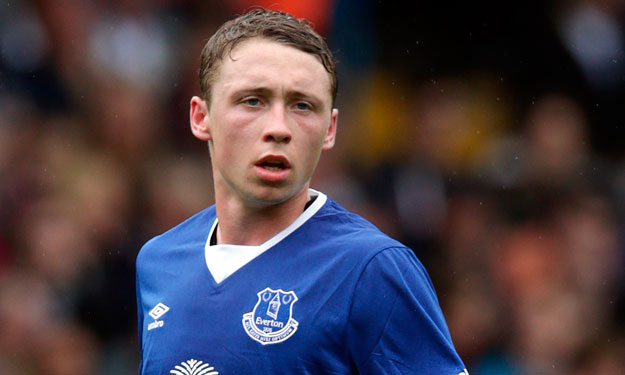 Everton Academy graduate Matthew Pennington signed professional papers in July 2013, agreeing a 2-year deal with the club after seven years' progression through the youth setup. The 18-year-old defender was a mainstay in the U18s during the 2012-13 season and also featured nine times for the Blues U21s side.

“I'm very proud to have got this contract,” Pennington told evertontv. “Starting off at 11 years old, I've come all this way to 18 now and I'm only just at the start of my career. It's great that I can have a chance to kick on and I think that's the idea of this contract.

“Now I have got to prove myself as a player in the real world. Hopefully I can make a career in the game and push on."

Described by the Everton official website as "a versatile defender... equally adaptable playing in central defence and at right-back," Pennington has also played for England at U19 level. As with most promising players, he was sent out on loan as the plan for his subsequent development evolved, with spells at Tranmere Rovers and then Coventry City.

Pennington joined Tranmere Rovers on a one month's loan deal in January 2014 that was extended until he was recalled by Everton to strengthen their Under-21 squad but he rejoined Rovers in March and remained on loan at Prenton Park until the end of the 2013-14 season.

He would spend the majority of the following season on loan at  Coventry City, where he was voted the club's Player of the Month in January 2015 as he became established in his more natural centre-back position. He went on to win the Sky Blues' Young Player of the Year award having made 25 appearances for the League One club.  In July 2015, he was rewarded with a new 3-year deal at Everton with Roberto Martinez expecting him to move up into the senior squad.

Pennington made his anticipated first-team debut in a Capital One League Cup second round tie at Barnsley where he acquitted himself well at right back in place of Seamus Coleman, who was rested, but he was sacrificed at half-time as manager Martinez made changes to claw back a 2-0 deficit. Later, he would replace Argentine Ramiro Funes Mori just before half-time in the Blues’ Third Round FA Cup win over Dagenham and Redbridge.

After spending much of the 2015-16 season playing for Everton U21s, Matthew Pennington joined Walsall on loan until the end of the season, beating the 5pm loan transfer deadline on 24 March 2016 to sign for the Saddlers. This gave him the chance to gain more first-team experience in League One.   He was recalled after 28 days, however, when the Everton first-team defence was hit by injuries ahead of the FA Cup Semi-Final against Manchester United and went on to get his Premier League debut against Bournemouth before saluting the new Champions at Leicester City.

New manager Ronald Koeman gave Pennington a run-out in a couple of pre-season games but, against Real Betis after a good performance, he pulled up with a torn hamstring 12 minutes before the end and would miss a huge part of the new 2016-17 season, being out for several months in recovery.

When finally fit again, in April 2017, while Coleman was out with a broken leg, Matty was dropped in the deep end at Anfield and was skinned by Coutinho for Liverpool's first goal, but he got breif redemption by scoring an equalizer off a Baines corner. He came on against Man Utd in the space of three days but could only watch in horror as Ashley Williams gave away a daft last-minute penalty.  However, the reward from manager Koeman was a 2-year contract extension in April 2017 and he played a full game in the win over Leicester City, before sitting out the last six games on the bench.

But hopes of making the step up into the first-team squad were then squashed with the arrival of Michael Keane and,  in July 2017, Pennington agreed a full season loan at Leeds United in the Championship, his Number 38 jersey being warn by Matty Foulds in three Checkatrade Trophy games while he was away.

While at Leeds United, Pennington was out for 2 months with an ankle injury and it was reported that he struggled a bit after his return. However, the press gave him high marks for his performance against Bristol in October 2017. He would go on to play in the majority of games for Leeds United, making 15 starts and 9 sub appearances.

He returned to Everton and reclaimed the 38 shirt number that Matty Foulds wore while he was on loan. Marco Silva approved another 3-year contract for Pennington in May 2018 before running the rule over him at the senior squad pre-season training camp in Austria during July 2018. However, he would sit out the ATV Irdning goalfest as the only unused sub. But he did get to play three halves of the seven pre-season friendly games.

It would not be enough, though, to show he had what was needed in the first-team squad and he was loaned out again, this time to Ipswich Town, his fifth spell in as many seasons.

Pennington would see a switch of managers as the Tractor Boys struggled to get off the foot of the Championship table. The 24-year-old defender was signed by ex-manager Paul Hurst but had received the stamp of approval from his successor, Paul Lambert, who picked him for every one of his five league games in charge.

Talking in December 2018, Pennington said: “I've never regretted the move because I've been playing games and I've enjoyed my time here, despite the results. It's a great club and I've been made to feel like part of the family here.”

Pennington had no idea what the future could hold when he would return to Goodison Park at the end of the season. But he admited he was reaching the stage of his career when he would like to make a permanent move.

“It would be nice to settle down somewhere,” he continued. “I’m 24 now and I’ve been out on loan five times, so I guess it’s getting to the time now where I need to find a club, settle down and kick on. It could be here but I don’t know.

“It’s just up to me to keep performing and playing games then we’ll see what happens. I don’t know what’s happening with Everton. I’ve had a phone call or two from them but nothing more than that.”

Pennington's hopes of finding a long-term home weren't met in the summer of 2019 but he did secure another season-long loan, this time to Hull City. However, it took the Warrington lad a long time to make any impression. Before December 29, the 25-year-old had made just 3 appearances for his new side, two of those in the Carabao Cup, with a Championship start against Millwall which lasted just 17 minutes. However, the defender ended the calendar year with a solid display at right-back against QPR – leading to a stellar display against Sheffield Wednesday to kick off 2020.

Hull City manager, Grant McCann, said, "He’s really enjoying it here. We’ve never had any grief from Everton, I think they trust him with us. He’s enjoying it here and he’s just getting on with it. He’s a tremendous professional, he really, really is. He’s one of the earliest in every day at quarter past eight. He’s there having his breakfast and he’s a terrific lad. When he goes out there he gives everything. He’s a lovely, lovely boy and hopefully good things will come to him."

He started to get more games with Hull City in February and early March until everything came to a halt as the Covid-19 pandemic closed down all football for 3 months. But Pennington agreed a month-long extension to his loan deal so that he could be selected for the nine remaining games Hull had to play after the Championship resumed in June 2020.

Everton were hoping to sell Pennington before October’s transfer deadline, as it was clear the defender would not get a look in under Carlo Ancelotti, but there were no takers until he embarked on another loan deal – the seventh in his Everton career – this time with Shrewsbury Town for the second half of the 2020-21 season.

He did well with the Shrews, impressing manager Steve Cotterill and the fans, especially as he scored the winning goal against Blackpool that ensured their survival in League One for another season.

The defender's contract at Everton was not renewed and he was finally released by the club in May 2021, departing with a heartfelt farewell to the club and the fans on social media before signing a permanent deal with Shrewsbury.