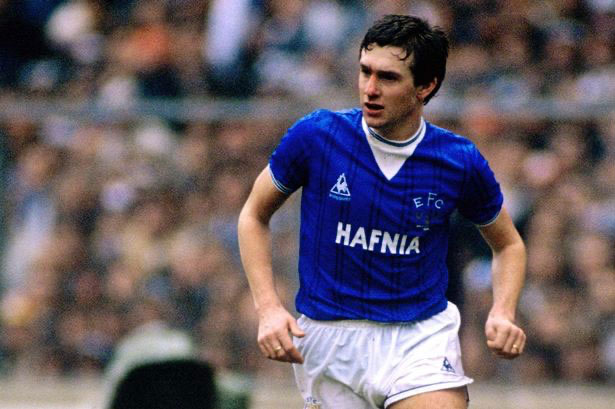 It has been Everton's good fortune twice in modern times that Liverpool have been strong enough to do without a player of indisputable quality: on the first occasion a gifted young Irishman with a magical left foot found himself unable to break into what was after all a formidable Anfield midfield quartet, and swapped red for blue; on the second a promising centre-half named Dave Watson exchanged it for the yellow of Norwich City and proved his quality there, attracting the attentions of Everton manager Howard Kendall.

A transfer tribunal in August 1982 valued Kevin Sheedy, the owner of that left foot, at £100,000, a figure which Liverpool manager Bob Paisley was known to be unhappy about. Paisley was an excellent judge of a footballer's potential, and he was right. Sheedy proved capable of moments of match-turning genius, either in open play or from a dead ball. He slotted very neatly into the left side of the Everton midfield, bringing variety and imagination to the Goodison attack – Gary Lineker in particular profited from superbly-timed through-balls over square defences.

Having been at Liverpool, Sheedy could of course play the passing game and linked up well with the likes of Reid and Bracewell in the all-conquering mid-eighties side, whipping over the kind of crosses that strikers such as Graeme Sharp and Andy Gray thrive on. So accurate was his left foot that it tempted comparisons with his Eire countryman Liam Brady.

In fact, unlike Brady, Sheedy was Irish by choice. Born in Builth Wells, he could have joined club colleague Neville Southall in the Welsh side, but felt that the Republic offered better international prospects, an avenue afforded him by the fact that his father hailed from County Clare. Indeed, he played in the 1998 European Championships and the 1990 World Cup in Italy, scoring his country's first Finals goal – against England. The delicious irony surrounding that goal was that Sheedy stole the ball from the toes of Liverpool's Steve McMahon (formerly of Everton!) before firing it, with typical accuracy, past Peter Shilton.

As the advancing years caught up with Sheedy, never blessed with pace anyway, he was given a free transfer in February 1992. Kevin Keegan, newly installed as manager of Newcastle United, hired him to assist in the Houdini-esque escape act that was the run-in to their season in Division Two. The following season Newcastle were First Division Champions – due to the creation of the Premier League in the summer of 1992, the Football League was reduced to three divisions – but Sheedy soon found himself surplus to requirements at St James's Park and joined Blackpool.

After retiring as a player, Kevin had assistant managerial roles at Tranmere Rovers and Hartlepool United before joining Everton's youth academy as a coach in 2006. In 2017, following a bout of bowel cancer, he took up another youth coaching role at Al-Shabab in Saudia Arabia before being appointed manager of Waterford in Ireland in 2020 but was sacked the following year.