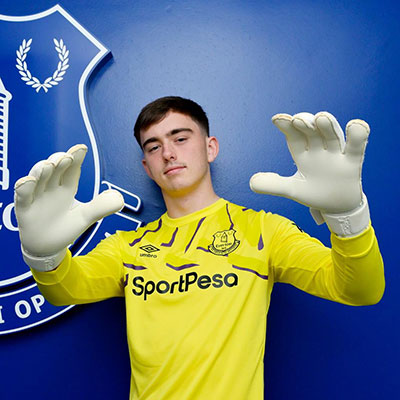 Harry Tyrer signed his first professional contract with Everton in January 2020. The then 18-year-old goalkeeper, who joined the Blues as a seven-year-old, had been promoted to David Unsworth's team from the Under-18s and there was hope that he had a big future ahead of him.

Born in Crosby, Harry had become the first-choice keeper for the Under-18s in the 2018-19 season.  He was also a key figure as the team reached quarter-finals of the FA Youth Cup that season, notably saving three spot-kicks as the Toffees beat Stoke City in a penalty shootout in the 4th Round.

Tyrer told evertonfc.com of his delight to sign pro forms and a deal that would run until June 2022 with his boyhood club:

“It means the world to sign this contract. I've supported Everton all my life, so I'm very proud. Everyone in my family is a Blue and it means a lot to them, too. It's fantastic and I'm so happy.

“The hard work continues. This club has helped me grow and become the player I am today. I owe credit to all of the coaching staff at the Club, they have been brilliant for me.

“Long-term, it would be a dream to walk out at Goodison to Z-Cars for the first team – that's something I've dreamt about since I was a kid. At the moment, I just want to play as many games as I can for the Under-23s and keep progressing.”

In the 2019-20 season he seemed to be winning the contest for gooalkeeper of choice in the Under-23s, edging out Nicolas Hansen, with Joao Virginia not requiring a great many games to keep his eye in. Season 2020-21 saw the ratio maintained between him, Hansen and Virginia but with fewer games in total as cup competitions were either canceled due to Covid, or Everton chose not to participate (EFL trophy) for fear of fixture congestion in a compressed season.

When Robin Olsen was out injured, Harry Tyrer saw himself elevated to the first-team squad, where he would sit on the extended subs bench for 5 Premier League games in March and April 2020, as part of a pair of reserve goalkeepers – quite why Carlo Ancelotti needed two substitute goalkeepers on the bench remains a mystery, but some thought it might be his way of sending out the message that he just doesn't have sufficient outfield players who are good enough to be in his squad.

Ancelotti would depart, to be replaced by Rafa Benitez, who took Tyrer to the Florida Cup but, at some point early in the new season, he sustained a thigh injury, which was sufficient pretext for Benitez to add the aging Andy Lonergan as back-up keeper along with Asmir Begovic, both of them effectively blocking Tyrer's way to the first team, with Joao Virginia accepting a season-long loan at Sporting Lisbon.

Tyrer's continued development with the Under-23s was interrupted when he was out for 2 months with injury. But he returned in October 2021 to became a mainstay of the U23s revival after they had made a dreadful start to the season without him.

He signed a new contract in January that runs through June 2025.and even got a seat on the bench for a Premier League game against Newcastle Utd and an FA Cup tie at Crystal Palace when Pickford and then Begovic were ill.

For the next stage of his development, Harry was loaned out to Chester of the National League North for the 2022-23 season.