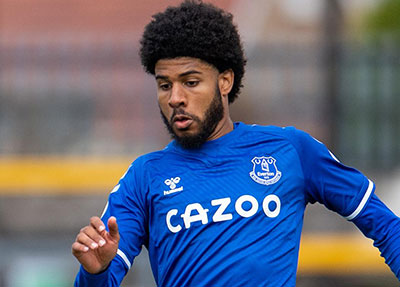 Ellis Simms has been handed another chance to further his development with regular first-team football with a season-long loan at Sunderland.

Having spent last season in the Scottish Premiership, the striker now gets the chance to cut his teeth in England's Championship following the Black Cats' promotion from League One.

Now 21, Simms travelled to the US with the Everton first team but was not used by Frank Lampard in either pre-season friendlies there or against Blackpool last Sunday.

He has previously spent time on loan at both the Seasiders and Hearts and reportedly turned down offers from both clubs in order to move to Wearside.

Simms, who has been with the club since July 2017 and has 2 years remaining on the contract he extended last November, is the seventh Everton player to go out on loan this season.

His only game for the Everton first team came when former boss Rafael Benitez selected him as a starter at Chelsea last December, replacing him with Lewis Dobbin after the hour mark.


Jeff Armstrong
1 Posted 29/07/2022 at
So another forward option disappears, Frank must have a striker lined up, good luck to Simms though championship is a tough league and Sunderland I think will struggle.
Robert Leigh
2 Posted 29/07/2022 at
Natural next step for him. If we've been sensible there is a recall option for January if he's scored 15 by then.

We must be having another striker come in if Ellis has gone though, especially as there is talk of Dobbin going on loan too.

Joe McMahon
3 Posted 29/07/2022 at
I'd rather he still be available, as he can shoot better than DCL, it's other areas of his game that requires work. No doubt we will be cursed by injuries and there is the league Cup ( it would be nice to win it before it's disbanded).
Robert Tressell
4 Posted 29/07/2022 at
Championship is probably a decent step up from Scotland so another good developmental loan. If he scores 15 goals by mid-season then it will be a roaring success, Robert.

He normally starts slowly and then finishes well - so more likely to score more over the latter half of his loan.

If he gets 15 over the whole season we'll have a £10m (+) striker on our hands who we can either use in the Prem or sell.

Hopefully we have a better reserve option than Rondon to cover the position if DCL is out at any point.

David White
5 Posted 29/07/2022 at
Does this mean Frank is going to give broadhead a shot ? They wanted him back. The lad scored 10 in 22 for them last year. If that's not a successful loan, what is ? Could of been more but for injury. Nathan should be given a crack at first team now. If he doesn't, then what message is that sending to simms? If simms sees him getting a chance that gives him some confidence that if he does well, he too will gey his chance.
Or what's the point in loaning them ?
Mike Gaynes
6 Posted 29/07/2022 at
He's done well in his previous loan spells -- 10 goals in 24 at Blackpool, 7 in 21 at Hearts.

Let's hope he proves out and this is the last loan before he joins our first team.

Nathan Jones
7 Posted 29/07/2022 at
Good luck to him. I know its not traditional to comment that the club is managing a youngster the right way but

He went out on loan at blackpool when they were in League One, Then a step up to the SPL and now a step up again (sorry Scottish football fans) to the championship. Every time he has gone out its been up a level and he has acquitted himself.

Admittedly he hasn't blown the leagues away, but that does not bother me. He has just gone about his business and improved.

Broadhead must be gutted, he must have thought he was nailed on to go back there. Cardiff City are in desperate need of a center forward, a loan back to the home land in world cup year ?

Nathan Jones
8 Posted 29/07/2022 at
Good luck to him. I know its not traditional to comment that the club is managing a youngster the right way but

He went out on loan at blackpool when they were in League One, Then a step up to the SPL and now a step up again (sorry Scottish football fans) to the championship. Every time he has gone out its been up a level and he has acquitted himself.

Admittedly he hasn't blown the leagues away, but that does not bother me. He has just gone about his business and improved.

Broadhead must be gutted, he must have thought he was nailed on to go back there. Cardiff City are in desperate need of a center forward, a loan back to the home land in world cup year ?

Dale Rose
9 Posted 29/07/2022 at
They should call this lad the librarian he's been loaned out that often. Give him some playing time ffs.
Jim Bennings
10 Posted 29/07/2022 at
Probably a league where he's destined to ply his trade in the long run.
Gary Jones
12 Posted 29/07/2022 at
Jim, I hope it makes ye feel good writing off 21-year-olds online.
Peter Hodgson
13 Posted 29/07/2022 at
I've been saying to anyone who would listen (and some who wouldn't) that he wasn't quite ready for the Premier League but this step up to the Championship should prove to be his final loan spell as it is a step up from the last two seasons.

I truly hope he does well and that his spell at Sunderland proves me right and he comes back at the end of the season knowing that he is going into the first team next season.

All he needs to do now is put his back into it and score bundle of goals, which in turn, should spur on Calvert-Lewin for his part. Happy days.

Mark Taylor
14 Posted 29/07/2022 at
I'd agree with Jim, at least to an extent. He'll be 22 by the time this loan finishes. He is clearly not enough of a prodigy to be bursting into the first team as a teenager and has not been in any England age group squads but, if by 22 he's not seen as being good enough even for a squad place, then the odds are he won't make it.

No shame in that; he might well prove good enough for the Championship and that is a success from a career perspective, even if some don't judge it that way.

I also think age 22 is not a bad age to be entering the first-team reckoning. By then he'll have about 50 to 60 first team (loan) games under his belt.

That's about right unless you're a natural who comes straight in about age 19.

Joe McMahon
16 Posted 29/07/2022 at
I'd hoped Frank would have used his connections and asked a former clinical striker, such as Ian Wright, to have some training sessions with all our strikers. It wouldn't do any harm.
Jack Convery
17 Posted 29/07/2022 at
It looks like Mr Spock has joined the 'loans dept' as this lad is being handled in a very logical manner. Long may it continue.

Here's to a successful loan. May he score and prosper.

I think going back up to Scotland would have given him a better chance of being a regular starter and keep the confidence with the aim of battering last season.

I hope he is good enough to play regularly for Sunderland and does well. The championship is a better, more competitive league but there's 4 good sides in Scotland that are of a similar level plus the big 2 that are arguably better but certainly bigger.

I feel the Championship is a bit of a slog, so many games which isn't necessarily good for young injury prone players. Broadhead may need handling with a little more care.

I don't think it's technique but understanding how to make the most of what you have for the team. Lost track of how many young players I've seen with all the tools but incapable of making it

In hindsight my specific problem as a young 'un was thinking I had to beat every player before me. Someone needed to whisper "look for the better option first and stop messing with women".

Not sure I would have listened but maybe this is what a change of environment might bring.

I can understand what you are saying but I have difficulty with why nobody at Finch Farm can bring that around (the messing with women bit apart). However, this is Simms's third loan spell and you would think that an improvement has been seen or it's just not working.

Wondering out aloud, maybe some better form of junior competition should be looked at with perhaps better coaches as it seems we think other clubs have them.

Joe McMahon
23 Posted 31/07/2022 at
Mike @6, correct I've only just noticed todays score, over 40k at Stadium of Light today. I still prefer him at Everton though unless a proven goalscorer arrives.
Ryan Holroyd
24 Posted 31/07/2022 at
He's crap and will never make it at Everton
John Otway
25 Posted 02/08/2022 at
Ryan #24. That's what we like when critiquing a young player. A measured response and a cogent argument.
Jim Lloyd
26 Posted 02/08/2022 at
I don't think the club would bother with him, unless it's thought that we have a 1st team player in the making. I seem to remember Leon Osman not getting into our first team til he was around 24 or 25.

This lad did well for Blackpool and Hearts. He's going to Sunderland, a step up and another step along his journey. If he does it at Sunderland where he's done it at the other clubs he's played for, then I don't think he can be crap.

Even if he doesn't make it to our first team, he might well bring in to EFC millions of pounds in a transfer fee; and for him a good living that he'd have deserved.

Personally, I'd love to see him, even now, being in our first team squad... but patience is the watchword.