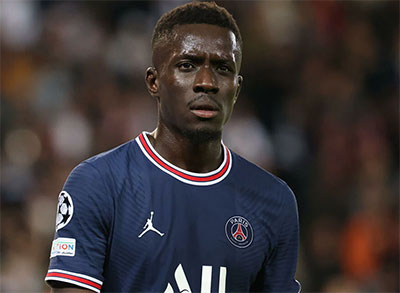 Idrissa Gueye looked as though he would finally an Everton player once again this week but reports now suggest that negotiations with Paris Saint-Germain have been called off.

Protracted negotiations over a two-year contract appeared to have been concluded more than two weeks ago but a reported wrangle between the French club and the player over a severance package held the transfer up.

Now it appears as though PSG have changed tack and are seeking a fee for Gueye rather than simply terminating his contract with less than 12 months of it to run.

With the transfer deadline looming and more than four weeks having passed since a deal appeared to have been struck, Everton are said by L'Equipe in France to have stopped talks with PSG, a sign, perhaps, that they will move on to other targets or a move designed to force the Parisiens' hands if the midfielder is, indeed, surplus to Christiophe Gaultier's requirements.


Gueye has agreed personal terms with his former club and has already undertaken the first part of a medical.

I guess they've got the money to mess about but it certainly seemed that they needed him off their books.

If, as it appears, the club have called PSG's bluff then that shows a sign of bottle previously lacking in transfer dealings.

If the player or his agent now force their hand we can go back to the table. But I see this as progress.

I still think we'll get him though.

Everyone can see this is PSG fucking with us because they think they're big enough to get away with it.

Kieran Kinsella
7 Posted 19/08/2022 at 19:56:42
Seems like both parties want their cake and to eat it. Gueye wants to leave but wants them to pay the rest of his contract. PSG want him to leave but don't want to pay him and want us to pay a largeish fee. Neither realized we don't have any cake. We don't even have digestive biscuits to offer.
Mark Frere
8 Posted 19/08/2022 at 20:01:25
According to Alan Myers the deal is all but done:

We may be short of digestives, but we've got a few (Hob)knob(heads) in the boardroom.

Facing our 3rd game of the season and still nobody on the books who vaguely recognises that we can put the ball between the goalposts.

Jack Convery
10 Posted 19/08/2022 at 20:15:41
We could have had Cheikhou Kouyate, in on a free a month ago. Same age, knows the EPL and plays alongside Gueye at international level. Viera wanted him to sign a new contract at Palace but he wanted out. Now at Forest!

No doubt giving Gueye his severance cheque, PSG now want us to pay for him, to get their money back !! Cheeky sods.

He wasn't all that first time around and a reprise of his bemusement at opponents running past to plunder our porous defence shouldn't be part of Frank's game plan.

We need to stop recruiting end-of-career players because, as mentioned elsewhere, we're not a rehab centre, neither should we be a retirement home.

Of course the news actually means he's at Finch Farm right now signed up and singing Karaoke with Bill...

We should seriously consider James Garner too... Man Utd want £14M – do they do "buy now, pay later" deals?

The midfield three of Gana, Garner, Onana is almost melodic.

£15M for Garner, £15M for Brereton Diaz, Kudus on loan and as I just said on another thread, Vasquez from MLS as Thelwell's cheap diamond in the rough 2nd forward. I'd be happy with that.

Unfortunately, Camara's already made a move to Monaco. Fee was only around €13.5 million too – I was under the impression it would have been much higher, I definitely think we missed an opportunity there.

More greed in the modern game... sigh... he was way overated anyroad.

The club are right to walk away and call their bluff, let them keep a player they don't want, and pay his year's salary, but I think they'll change their stance.

"I'm probably going to get burned for saying this, and my memory may be skewed, but I think we may dodge a bullet if he doesn't come back.

I thought we did to get him from Villa but my recollection with Gana is that he actually came in for a lot of stick in his early time with us for whatever reasons. After the initial interest in the 18-19 winter window when PSG started sniffing around many thought he would basically sulk and see the season out but he put in the best few months of his spell with us. I think most of us recall this final half-season when thinking about the player.

I am not getting the impression that Gueye is actually busting a gut to come back here. We need players who are here because they want to be here and we may just be better off letting this one slip through the net, especially if viable alternatives are in the frame.

Other than for the money I'm not even sure why Gana would actually want to come back to Everton. What's the appeal? He has a year left (I think) on his PSG contract and we are hardly an attractive proposition these days, and I think the prospect of relegation with another club (as he may see it) is quite discouraging.

Anyway, with the latest shenanigans, it's time to tell PSG and Gana to do one and move on to the next chapter.

Obviously Everton thought they had a deal agreed with both Gana and PSG but now one or both of them are trying to move the goalposts, so walk away, Everton.

So ignore anything these players put out on Twitter – their only loyalty is to their bank balance.

It is the essential signing.

Gueye would not only protect the defence properly with his tacking and covering he would keep the midfield ticking over with his passing.

But not only that, he was perfect to get the best out of Onana.

A defeat against Forest and PSG will know they have even more bargaining power.

A huge mistake not to pay PSG what they want, huge!

Alan McGuffog
30 Posted 20/08/2022 at 11:11:36
More than happy to eat humble pie regarding this. My memory is not what it was but I always thought that in his spell here he was so so. It was only in his last six months or so that he really showed his ability ? 🤔
Anyone share this view ?
Rick Tarleton
31 Posted 20/08/2022 at 11:23:15
Alan McGuffog, I agree with you. His creative contribution was limited, excellent at breaking up attacks by the opposition, but that was it.
Colin Glassar
32 Posted 20/08/2022 at 11:45:15
Rick and Alan, like Lee Carsley that was his job. He was used as a defensive midfield player. He was a spoiler. He was there to break up attacks and cover his defenders not be creating chances at the other end.

For his country and PSG he is another animal but then he's surrounded by better players. Remember how we suffered defensively when both left. Neither was replaced promptly and we suffered for it.

Looks like Thelwell is not a push-over. It will be a last-24-hours deal. I hope we'll land him. He'll let Onana time to grow into the Premier League as he provides stability and experience to mop up mistakes.

Gueye is a vital signing for the team and Onana's progress, so we should have the sense to make a compromise and get the deal done.

Kevin Molloy
38 Posted 25/08/2022 at 14:45:52
if we end the window having swapped Richarlison and Gordon for Onana, McNeil, Diaz Adams or Pedro and Gueye, that will be a remarkably shit transaction, even by the standards Everton have set these last few years.
Robert Tressell
39 Posted 25/08/2022 at 15:14:26
Kevin, in fairness, you need to add Coady, Tarkowski and Vinagre to your list of ins and outs.

On balance, the squad as a whole is possibly stronger for all that business – albeit the First XI may be a touch weaker until Calvert-Lewin is fit again.