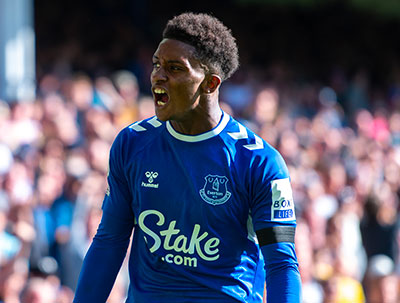 Everton salvaged a point from newly-promoted Nottingham Forest thanks to Demarai Gray’s late equaliser but it was another match that laid bare the team’s desperate need for a striker.

The winger timed his run to perfection to latch onto Jordan Pickford’s brilliant, 88th-minute ball over the top and then kept his composure to slot the ball past Dean Henderson to level the game at 1-1.

Gray’s strike cancelled out Brennan Johnson’s goal scored seven minutes earlier after Pickford had pushed Ryan Yates’s shot back into danger and though the Blues pushed for a winner in stoppage time, it was another push for points that was too little too late.

Everton had started the game well, with a dangerous early free-kick from Gray flashing past three blue jerseys in front of Henderson and Tom Davies missing the target when well placed after 10 minutes.


Anthony Gordon, largely the hosts’ most dangerous player on the day until Gray scored, had a 25-yard attempt parried away a few minutes later before Gray himself had a tame effort saved by the keeper.

Forest started coming into the game midway through the first half, however, after Everton’s initial fire had been extinguished and Nico Williams warmed Pickford’s hands with a strong drive.

Then, after an uncharacteristic mistake by the out-of-sorts James Tarkowski, Taiwo Awoniyi had a chance but shot weakly and Pickford was able to claim it and Orel Mangala was similarly unable to really test the Blues’ keeper from a similar distance.

At the other end, Gordon and Gray both had further sights of goal from just outside the box but both despatched efforts into the Park End.

Rondon had toiled up front but at least offered a focal point at times and when Davies fed him with a neat pass early in the second half, the Venezuelan turned his marker and fizzed a shot inches wide of the post from the edge of the box.

Perhaps due to concerns over his fitness, Rondon was withdrawn along with Davies five minutes later, a double change that saw Dwight McNeil and new signing Amadou Onana enter the fray for what was the latter’s home debut.

The gangly Belgian had marked his first appearance with a mistake in midfield that yielded a goal for Aston Villa last weekend and he got himself into trouble within minutes of coming on again when he picked up a yellow card for a bizarre rugby-style tackle on Lewis O’Brien.

Meanwhile, Everton occasionally threatened, first when a Gray free-kick tested Henderson at his near post and required the keeper to push the ball away to safety and then when the busy Alex Iwobi and Gray combined with the latter forcing another save, this time a one-hander to palm the ball behind.

Back at the Park End, Yates’s shot took a heavy deflection off Coady and, thankfully, bounced wide with Pickford wrong-footed and Williams drilled an effort narrowly past the far post as the visitors threatened following the introduction off the Forest bench of Morgan Gibbs-White.

Then, after Gordon’s lame effort had been easily gathered at one end, Forest scored at the other. Pickford got down to parry Yates’s strong shot but it fell to Johnson and the Welsh forward calmly picked his spot to stroke it into the opposite corner of the goal.

A goalmouth melée in which Gray, Gordon and McNeil all had shots blocked by a thicket of red shirts seemed to sum up the way Everton’s afternoon was doomed to end but a moment of inspiration from Pickford set Gray up to plunder a point whereupon the former Leicester man made no mistake with excellent touch and a cool finish.

There was still time for a late charge for all three points after Yates had belted a first-time shot over for Forest but Gordon had one more shot from the angle stopped, Iwobi whipped a shot onto the roof of the net and Gordon almost capitalised on a mistake by Joe Worral but the ball wouldn’t come down quickly enough for him to beat Henderson who had come to the edge of his area to make the block.

So three games have yielded just one point for the Toffees who continue to look toothless in attack. The transfer deadline is 11 days away and while the Blues have still not addressed that critical need, eight precious points have slipped away.

This was an eminently winnable fixture against a side still finding its feet in the top flight and trying to bed in a host of new signings so it’s hard not to view it as two points dropped.

There were flashes at times of the side that they can be with the right pieces in place but without the addition of goals in the side, they will continue to struggle.