Ferguson: 'I don’t agree with all this talk about relegation' 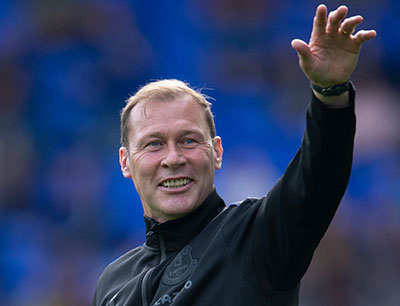 Duncan Ferguson says he is ready now to take on a full managerial role, that he is open to any challenge and that he left Everton this summer confident that the Blues won’t be involved in another scrap to avoid relegation this season.

Speaking with Paul Joyce of The Times in a lengthy interview about his past and plans for the future, Ferguson describes the wrench it was to leave the club he took to his heart as a player in the 1990s but explains it was right time, particularly as because the chance to work under Carlo Ancelotti was one of the key reasons why he didn’t step away after his first caretaker stint in late 2019.

“It was incredibly difficult for me to leave Everton, a club that I love,” the Big Scot said, “but I had made up my mind more or less six months before that my time was up and that I had come as far as I possibly could.

“I had to do the honourable thing. I think when you get interviewed for a job and don’t get it, it becomes a bit difficult. I didn’t want people thinking I was sitting back waiting for another shot at it. That was the first time I had been interviewed. I was turned down. In my mind that was it.


“The right thing to do was to stay until the end of the season because the club wasn’t in a very good position at the time. I felt I should ease that transition with Frank coming in, support him the best I could, and then come the summer I would look to move. It was easier for me but, of course, driving out of the training ground for the last time was heartbreaking.

“Frank [Lampard] didn’t want me to leave. I spoke to him two or three times, said what my plans were and I felt he genuinely wanted me to still be at the club.

“I think he will do well. Frank is a great coach, a great communicator and the players like him. You have to get respect as a coach and he has that. He has invited me back to the training ground in the future and I have spoken to him a few times since I left.

“Everton will finish mid-table comfortably. I don’t agree with all this talk about relegation. We were in a relegation dogfight last season, but Everton are not a relegation team by any stretch of the imagination.”

It's probably realistic but a shame to hear it so accepted.

Six years on from the "Nothing Will Be The Same" dawn of a new era under Moshiri and we now harbour ambition of mid-table mediocrity.

I accept that, after last season's scare, most would take that, but at what point do we as a club raise the bar?

It seems like the ambition of Top 6 every season under Moyes (Martinez's first year) has totally unravelled.

But one thing I like about Frank is that he is a winner. He doesn't want to be a pragmatist - but he's doing it because needs must.

I expect a decent cup run. And realistically hope for a cup win.

And I expect a plan to be unfolding behind the scenes as to how we really get competitive once we have the best stadium in the North.

Re Ferguson, he missed the Sunderland job, which is a pity.

Lyndon Lloyd
6 Posted 02/09/2022 at 19:14:42
If the alternative is relegation, then of course mid-table comfort is a short-term ambition. We've made a mess of the past 6 years. You don't recover from that overnight, especially when you have so little firepower in your ranks.

Perhaps if Calvert-Lewin can play the majority of our games once he returns and everything else gels, we can surprise a few people and go on a good run but, for now, let's try walking first.

Agreed, though it's the reality of the situation. Mistakes were made, the squad is in transition, and we have to walk before we can run. As long as we're on the right path, I'm good with that.

Lyndon & Bill - correct on the reality; just sad to see it starkly framed almost as a target I guess. Hopefully not for too long.

But he stayed too long for his own career. Maybe I'm wrong, but I just can't see where he goes from here. I don't see him as a leader / manager. Way back in the day and for different reasons, he didn't like the limelight. Despite his on-the-pitch presence, off the pitch, he prefers to be in the background from what I've seen. Is that an unfair assessment?

I'll excuse the mid-table comment. He was an Everton player in a generation where that was considered to be a degree of success. I know he gets the club and maybe is being realistic in the here and now, but not for me that type of comment.

Don Alexander
11 Posted 03/09/2022 at 01:31:29
Ferguson plundered our club in exchange for minimum output throughout his playing career. He came crawling back as a bankrupt showing, in his opinion, total commitment to football for the very first time in his career. Somebody at the top of our club (guess who folks!) believed in him and enabled Ferguson to remain solvent for feeding his pigeons, his first love.

His very first manager, Jim McLean, publicly despaired of his shitty attitude as a teenage prodigy. He never changed as a player.

He now states he's up for a manger role, aged 50, with zero real experience in the role and a very vague, at best, history as a coach/cone-arranger, months after becoming available to everyone.

Anyone see a queue around the block forming to sign him?

Can't disagree on Dunc the player but did you ever hear the story of the Prodigal Son? There are people who make a mess of their lives then realize their mistake and turn it around.

I don't think Moyes was one for charity especially as he saw Dunc the player at his worst. I don't know if Dunc would make a good manager but I think it's time to move on from the guy who head-butted John McStay and see the older man the players openly admired and respected as a coach and Evertonian.

I think this is where the game has changed. 30 years ago someone like Dunc would be a career number two. An Archie Knox, a Joe Jordan. The game is a lot more technical now. Look at Frank’s crew, or indeed the Mourinho pipeline of himself, Boas, Rodgers etc. None of them great players, none of them heart on the sleeve rabble rousers. But more studious, technically savvy types. I don’t know if Dunc has that and doubt at age 50 anyone will roll the dice when you have managers 15 years younger. If anything someone like Dunc might be a good union leader in the PFA or something.

I don't know the source or how much validity there is in it, but I my brother told me this morning that he is being linked with the Dundee United position. Good move? Unsure - and he seems very settled in the North West of England.

He (my brother) also told me that Duncan recently spent a week with Real Madrid at the invite of Ancelotti to observe the coaching sessions. Again, I won't claim to be able to confirm if that is true or just internet myth.

Jerome Shields
16 Posted 07/09/2022 at 16:45:00
Ferguson played okay for Everton and was occasionally outstanding. But as a coach, once he had voluntarily slipped in, he was just interested in keeping his job and wages. He was good at doing this, out-surviving many managers, and never held accountable for his performance under them.

He really never wanted the Everton manager's job because the gravy train might end. It eventually did and, though given the opportunity to extend it, even he could not be bared-faced enough to sit on. I can't see him managing any team for long.