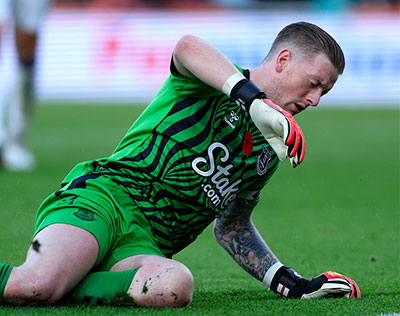 Everton returned to Vitality Stadium hoping to make amends for the second-string side’s abysmal showing in the Carabao Cup on Tuesday but left having been comprehensively beaten again by Bournemouth and hovering above the relegation zone going into the break for the World Cup.

A horrible mistake by Jordan Pickford gifted the Cherries the opener in the 18th minute, refereeing controversy surrounded the home side’s second while uncharacteristically poor marking at a set-piece allowed Jaidon Anthony to score against the Blues for the second time time in four days to wrap up a miserable afternoon for Frank Lampard.

The manager and many of his players faced irate fans in the away end after the final whistle but he will be concerned that recent results might prompt a similarly unpleasant response from Everton owner Farhad Moshiri who has a six-week hiatus to contemplate Lampard’s future.

Having made 11 changes to his team for the cup tie, Lampard restored nine of his starting XI to the line-up, with only Nathan Patterson and Neal Maupay keeping their places, the latter deployed up front with Dominic Calvert-Lewin ruled out through injury.


Maupay would have a torrid afternoon before being replaced by youngster Tom Cannon with 15 minutes to go but he had an early chance to make his mark when a cross from the left arrived at his feet but after swivelling to get a shot away, he could only watch it fly narrowly wide of the angle of crossbar and post.

That would be the sum total of Everton’s early efforts and it was Bournemouth who emerged as the more dangerous side as the first half progressed. James Tarkowski was called upon to charge down an effort from Dominic Solanke and from the resulting corner in the 14th minute, Kieffer Moore’s back-post header was repelled by Patterson.

Four minutes later, Gary O’Neil’s side took the lead and it came from a howler by arguably Everton’s best player. Solanke’s cross was inexplicably batted into trouble by Pickford and Marcus Tavernier gratefully seized on the loose ball to knock it into the empty net.

11 minutes after that it was 2-0 as the Toffees failed to adequately deal with a corner but then stopped to appeal for referee Craig Pawson to halt play for an apparent head injury to Tarkowski. The official allowed play to continue, Pickford parried Phillip Billing’s shot away but when Tavernier put the ball back into the six-yard box, Moore was there to power a header in from close range.

The Welsh striker had clashed heads with Vitalii Mykolenko in the process and the Ukrainian left-back was forced off, with Seamus Coleman coming on to replace him.

Everton didn’t manage their first shot on target until the 40th minute, a fairly tame shot from Alex Iwobi that was comfortably gathered while Maupay’s appeals for a penalty in first-half stoppage time fell on deaf ears where Pawson was concerned.

With Lampard no doubt appealing for his charges to step up their efforts after half-time, Everton produced arguably their most dangerous moment of the contest when Amadou Onana muscled his way past his man but elected not to shoot, choosing instead to lay it back. Unfortunately, his cut-back fell to Idrissa Gueye who blazed over rather than work Travers in the Bournemouth goal.

Meanwhile, Everton continued to look vulnerable in transition, with Pickford having to save from Solanke and then Tavernier before Tarkowski dropped a header onto the roof of the net from a corner at the other end and Patterson saw a commendable volley fly over the crossbar from the edge of the box.

Any hope that the visitors had of clawing their way back against Bournemouth in the manner that both Tottenham and Leeds did in the Cherries’ previous two games went out the window with 20 minutes left.

Lewis Cook swung a free-kick into the Blues’ box and with no one tracking the runner, Anthony was left unimpeded to head powerfully past Pickford to make it 3-0.

Patterson spurned a potential lifeline almost immediately afterwards when Iwobi’s cross just eluded Maupay and McNeil in the middle and the Scot couldn’t turn it in from a tight angle at the back post.

Solanke, meanwhile, thought he had made it 4-0 a couple of minutes later but his goal was chalked off for offside as Lampard prepared to withdraw Maupay and McNeil in favour of Cannon and Anthony Gordon.

The two substitutes combined almost immediately, with the 19-year-old striker, who had made his senior debut off the bench on Tuesday, connecting with the winger’s cross but managing only to head straight at the goalkeeper.

Demarai Gray had a late shot deflected wide and slashed another shot well off target while Billing almost compounded Everton’s misery when he drilled a shot across the face of Pickford’s goal and inches past the far post.

The defeat leaves Everton going into the break for the World Cup sitting a two point off the bottom three but with larger concerns looming over the team, the manager’s inability to find any consistency from his players and the erosion of the defensive solidity that had been one of Everton’s strengths so far this season.