Specialist feels he will be fit in time 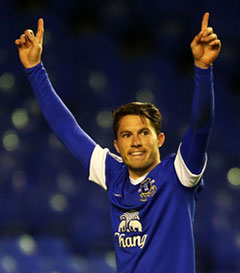 Bryan Oviedo's remarkably quick recovery from a double-leg break in January has him on course to play for Costa Rica in the World Cup Finals this summer.

That is the assessment of a specialist in London this week who feels that the fullback could be ready to play in Brazil just five months after suffering the horrific injury at Stevenage.

The 23 year-old had a rod inserted in his tibia on the Monday after the FA Cup Fourth Round tie and was quickly on the road of rehabilitation, tweeting video of himself on an exercise bike just three weeks after undergoing the surgery.

Roberto Martinez explained today that before flying back to his native Costa Rica, Oviedo saw an independent specialist in London who says his prospects for fulfilling his World Cup dream are good.

"Bryan is well ahead in his recovery time," Martinez is quoted in The Guardian. "We have sent him back to Costa Rica because we are working with the national team who want to assess him.

"He saw an independent specialist in London before he went away and the specialist feels he can make the World Cup. That would be an incredible statement given he suffered the injury six weeks ago at Stevenage."

The club will work with the Costa Rican national team over the next fortnight to assess and track his progress and Martinez stresses that Everton won't stand in his way if he is ready in time to play in Brazil.

"The World Cup is an incredible opportunity for him so that is why we are working together with the national team to try to get him fully fit," Martinez continued.

"It would be phenomenal for him personally if he was to make it. He has been very positive from the beginning.

"Physically he is a machine, so I would have no concerns over that. He's a quick healer but he's also got that positive mentality and he's got that goal of getting to the World Cup. He is a great example for anyone."

"We know for sure that he's going to be fit for pre-season but if we can get him fit for the World Cup it would be incredible. For a player to go through an injury like that and make a World Cup would mean so much. We want that to happen, I certainly wouldn't stand in the way. He deserves it to happen. We would get a better player back at Everton if Bryan has played in the World Cup.

"There is no reason for us to feel it is a risk him going the World Cup but we just hope that Costa Rica can use him, otherwise it would be pointless them taking him."