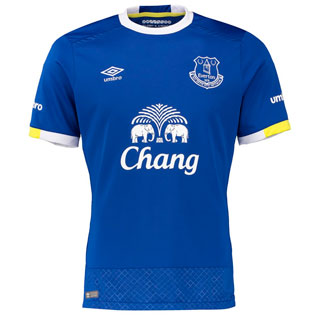 Everton have officially unveiled the new home strip for next season.

The new design features a rounded white collar and yellow accents on the sleeve trim and a criss-cross pattern at the bottom of the jersey in a nod to the Archibald Leitch iron work that adorns Goodison Park.

A fuller depiction of the iconic Leitch design is featured on the inside back of the neck of the shirt along with the coordinates for Goodison Park.

The shorts are white with yellow accents and the socks feature a yellow and blue band around the middle.

The new strip will be worn for the first time on Sunday when Everton close out the season against Norwich City at Goodison Park.

Speaking about the new kit, Everton captain Phil Jagielka said: “There's nothing like playing at Goodison Park in front of our passionate fans and knowing you are following in the footsteps of some of the greatest footballers in the world. The nod to the stadium and its history in the kit is a great touch. I love the detail of having the co-ordinates on the neck of the shirt”

Supporters will also be able to pre-order at the Toffee Shop on the corner of Gwladys Street and Bullens Road and in the Fan Zone at Goodison Park on Sunday.

Fans can pre-order now the new kit online and in Everton stores when it goes on sale on 4th June. 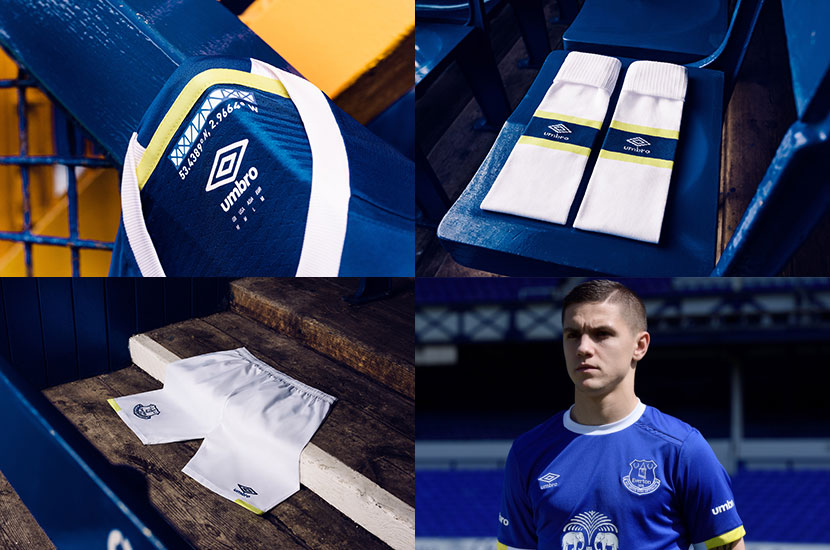 Note: the following content is not moderated or vetted by the site owners at the time of submission. Comments are the responsibility of the poster. Disclaimer

Could be our last premiership kit if Bobby Buffoon keeps his job.

However - who really gives a flying f--- at the moment. They should have timed its launch alongside the announcement of our new manager. Wait - launching it a week before the start of the new season? Maybe not.

Bears an uncanny resemblance at first glance to the 1997-99 kit which was worn during two season's of struggling against relegation - history will be repeating itself if we're not careful!

Or that new marketing team are earning their money for a change.

This one looks better

Reminds me of the Keijian sponsored kit back when Our Wayne was still one of us.

Is the "de-bossed waffle effect" code?!

Steve Bingham
28 Posted 12/05/2016 at 09:08:22
Does the club actually realise that we are truly not bothered about the flamin new kit until they show us intent to sort out the other few elephants in the room ? Do that and demonstrate some ambition and drive and I will do the same and part with my hard earned and buy a couple for the kids ! For goodness sake stop taking us for clueless mugs ..
James Marshall
29 Posted 12/05/2016 at 09:10:12
Uninspired. Even the marketing shots show up our shitty old ground with the kit laid out on the crumbling old wooden steps, and our crappy seating. Wise up and modernise for fuck sake. Benitez was right, small time club in every respect. Everton is a stuffy old club that stinks of moth balls and Pears soap. We truly are the smelly old Grandma of the Premier League.
John Daley
30 Posted 12/05/2016 at 09:13:18
" I love the detail of having the co-ordinates on the neck of the shirt”

As if you do Jags. As if you thought to yourself "You know what, I really love that. It's pure genius and..err..super handy if we ever get lost".

They'd have been better off having the co-ordinates of where each player should stand at set-pieces or, for Lukaku, co-ordinates showing him the way out of his own arse.

Nicky Styles
31 Posted 12/05/2016 at 09:13:45
My god that is horrible. It looks like it was designed by a child! This random yellow stain on the cuffs? Whoever designed this should consider himself very lucky to have the job he has because he clearly has no idea what he's doing.

What makes this joke of a kit even more annoying is the fact that only 2 days previous an absolutely fantastic kit was leaked on social media. It looked really sharp. Obviously too good to be true.

We have got bigger things to worry about than the fact that umbro (who uses umbro in the 21st century ffs!?) are our kit manufacturers and churn out shit like this every year, but I do take a degree of solace in the fact that I am not a parent or someone who will have to buy this rag for a young bluenose. That EFC demand money for this shit is criminal!

I'd like to see a return of something like the old Latchford Kits both home and away.

Richard Reeves
34 Posted 12/05/2016 at 09:22:19
I like it; would prefer it without the yellow but for once they haven't fucked up the neckline.
Thomas Surgenor
35 Posted 12/05/2016 at 09:26:20
The change socks remind me of boca.
All this changing of kits every year is making it very hard for designers to come up with something nice and a little bit different. There all starting to look the same to me. My favourite lot of the last decade was actually Martinez first season with the navy blue.

Spare a thought for the likes of saints, magpies and mackems paying over the odds for a shirt that prob looks identical from distance.

That's a great kit.
Retro looking with a modern appeal... If that makes sense?

The kit is okay but we have far bigger things to concern ourselves with. Maybe we should bring back the terrible kit of 2 seasons' back with that crest. At least we won games in it.

No collar, no likey.

I loved that Danka one too of 95, the 1995 Cup Final, oh fond memories and Kanchelskis singlehandedly killing them at Anfield.

On to the new kit, I quite like the top, its ok but as we say and as I said a few years ago when we were all having that mad debate about the badge change, it's not really important, it's the results and the players that wear it.

Having a great kit is nothing if your team is shit.

Not just the on the pitch activities showing a lack of imagination and going backwards then.

The navy Chinese button collar of a couple years ago has been my favourite by far. And the earlier Keijan one with the blue flat collar is nice to wear.

Exquisite!... your comments, not the design!

The togetherness of the design team shines through.

Although they were working with constraints they never lost focus and their effort and intent was immense.