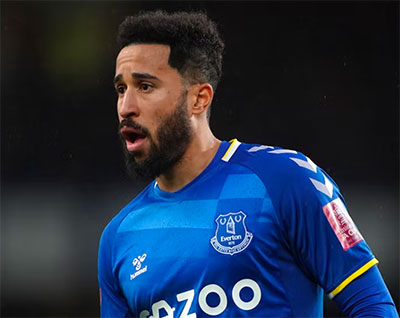 Andros Townsend’s hopes of returning to action before the end of the year have been dashed by what Frank Lampard described as “a setback” in his recovery from a ruptured anterior cruciate knee ligament.

The veteran winger suffered the injury last March in an FA Cup tie at his former club, Crystal Palace, but had hoped, given the pace of his rehabilitation, that he might be available for selection again when the season resumed after the World Cup on Boxing Day.

Townsend, a free-transfer acquisition from Palace by former Everton boss, Rafael Benitez 18 months ago, was on duty as a pundit during Qatar 2022 but he won’t be back on the pitch for the Blues in a competitive capacity until the New Year.

Lampard said in his pre-match press conference ahead of the Boxing Day clash with Wolves that Townsend “won’t be available for his next batch of games” which, by inference, hinted that he wouldn’t be ready until well into January at the earliest but the manager has cast doubt on the player featuring next month.


"I feel bad for him, his professionalism in trying to get fit has been a big deal in a positive sense and we will keep working with him," Lampard said. "We were looking at January, it will be a hard call for him to be fit in January at this point.”

It’s unfortunate for both player and club. Townsend was an important player for the Toffees in the first half of last season, weighing in with some vital goals early in the campaign as the team got off to a fine start under Benitez.

That form soon evaporated, however, and the Spaniard was sacked in January, leading to Lampard’s appointment and, eventually, the club staying in the Premier League with a game to spare thanks to a stunning come-from-behind win over Palace at Goodison Park in May.

But, am I the only one a little bit miffed that rather than complete his final month of recovery at Finch Farm, Andros flew to Qatar to work for someone else and has now met with a setback on his return?

Ray Roche
2 Posted 24/12/2022 at 15:58:23
Chris, I doubt if Andros would be allowed to go to Qatar without the club’s blessing.
Chris Hayter
3 Posted 24/12/2022 at 16:03:30
Undoubtedly the club agreed, so not all on Andros, who as I’ve said is by all accounts a great professional and decent man. Just in this instance, felt it was a strange decision by both club and him to risk the previous 11 months rehabilitation. Perhaps, we weren’t paying him 50k a week while he was working for ITV, but I would be surprised.
Kieran Kinsella
4 Posted 24/12/2022 at 16:05:05
Was his setback that he got arrested for ramming his car through a roadblock 2 weeks ago?

Unfortunately, I'm not surprised at the delay... his injury typically requires a full year of rehab.

Get rid of the toe rag, fine him. Suspended jail term, banned for a year, contract ripped up.

There you go, Mr Nice Guy, it's called repercussions, something you really should have learned in junior school!

At his age, it will be tough to get back to where he was. His Everton career is probably over, unfortunately for both him and us.